US Dollar Breaks Out

After roughly two months of declines, at the end of May the US dollar (proxied by Bloomberg’s dollar index) found support around the lows from the first week of the year.  Since then, the dollar has rallied 4.13%, moving back above its moving averages in the process which have also acted as support ever since. This week alone the dollar has gained 1.4%, and that upward move brings the dollar to the highest levels since early November and the early spring highs when the index stopped short of its 200-DMA. 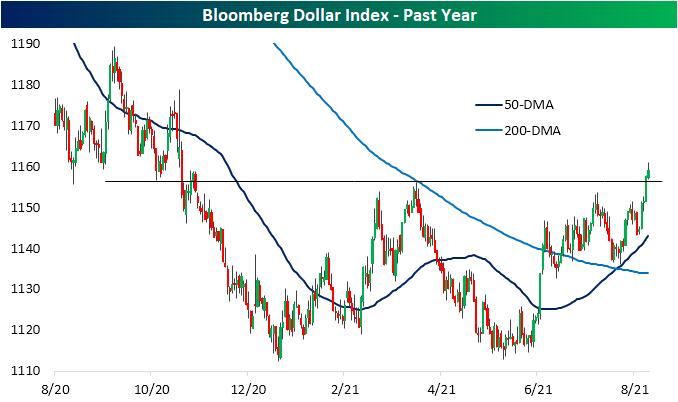 Taking a step back to look at the past five years, those lows that were reached earlier this spring and at the start of the year can actually be traced all the way back to early 2018 lows. Similarly, the recent highs that were taken out this week are around the same levels as the early 2016 lows.  With the dollar now having broken out, it is no longer at the low end of that five-year range. Click here to view Bespoke’s premium membership options.