Below is an updated look at home price changes across the country using the most recent S&P Case Shiller home price indices.  As shown, the National index rose just 10 basis points month-over-month and 3.34% year-over-year.  Notably, the number of cities that saw rising and falling home prices month-over-month was evenly split at ten apiece, so we’re no longer seeing broad-based, nationwide increases like we were a few years ago.  Mid-west cities like Detroit, Cleveland, and Chicago were three of the four biggest decliners month-over-month, while the West Coast and Northwest cities like Portland, San Francisco, Seattle, and San Diego all declined as well.

After seeing an epic surge in home prices for years during the current expansion, San Francisco is now the only city that is down year-over-year with a decline of 0.43%. 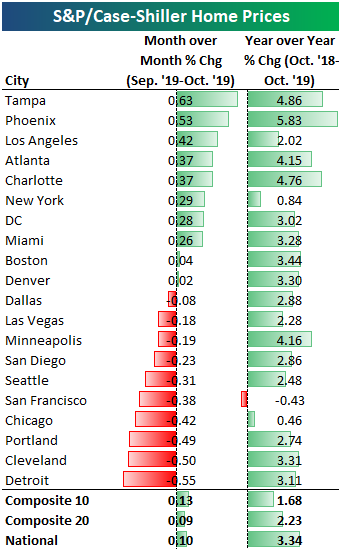 Below is a chart showing the change in home prices from their peak level at the top of the housing bubble in mid-2005.  This allows you to see which areas have fully recovered from the housing crash and which have not.  Denver and Dallas are both more than 50% higher now than they were at their peaks in the mid-2000s, while the National index has eclipsed its housing bubble highs by 15%.

On the downside, Las Vegas is the farthest below its prior highs at -17%, followed by Chicago at -14%, Phoenix at -13%, and Miami at -12%.  DC, Tampa, and New York are the three remaining cities that have still not recovered all of their losses from the housing crash/financial crisis. 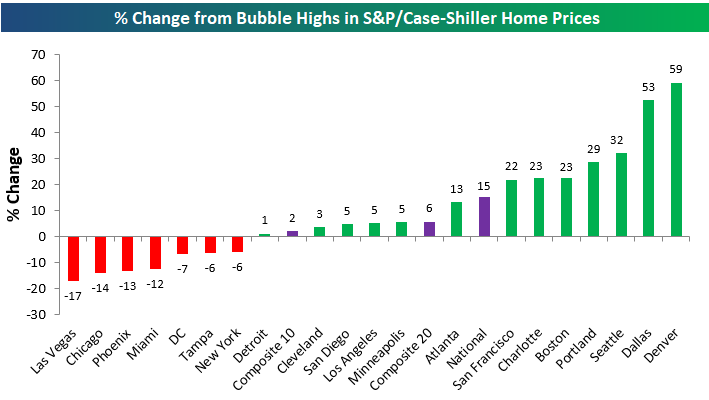 Below is a look at how much home prices have risen from their housing crash lows that were mostly reached in 2012.  The National index is now up 59% from its lows, while San Francisco and Las Vegas are both up more than 110%.  Remember, though, that while San Francisco has easily eclipsed its prior highs from the mid-2000s, Las Vegas is still 17% below its prior highs even though prices have more than doubled off of their post-crash lows.

On the weak side, New York home prices are up the least of any city at just 29%.  (Note that the 20 cities are usually based on the city and its surrounding areas.  For the New York region, it includes New York City, Long Island, the mid-and lower Hudson Valley, Newark, Jersey City, Paterson, Elizabeth, and Edison, NJ, and Bridgeport, New Haven, Stamford, Waterbury, Norwalk, and Danbury, CT.) 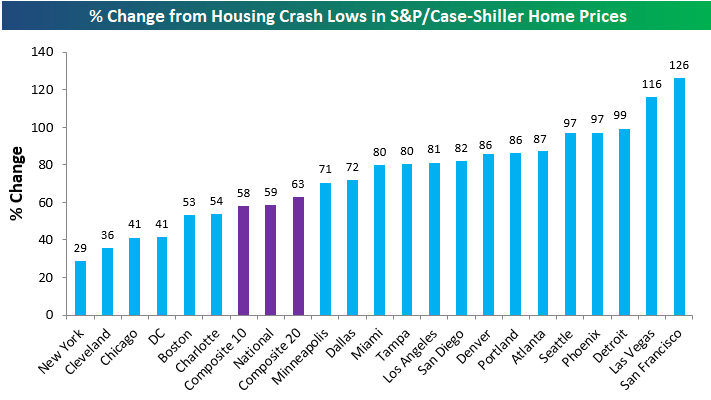 Below are historical charts of all the home price indices tracked by S&P Case Shiller.  Cities with green shading are ones that have made new highs this cycle above their highs at the peak of the housing bubble in the mid-2000s.  These indices are all indexed to 100 as of January 2000.  Join Bespoke Premium to receive our best investment research on a daily basis.  Click here to receive half off for the first three months. 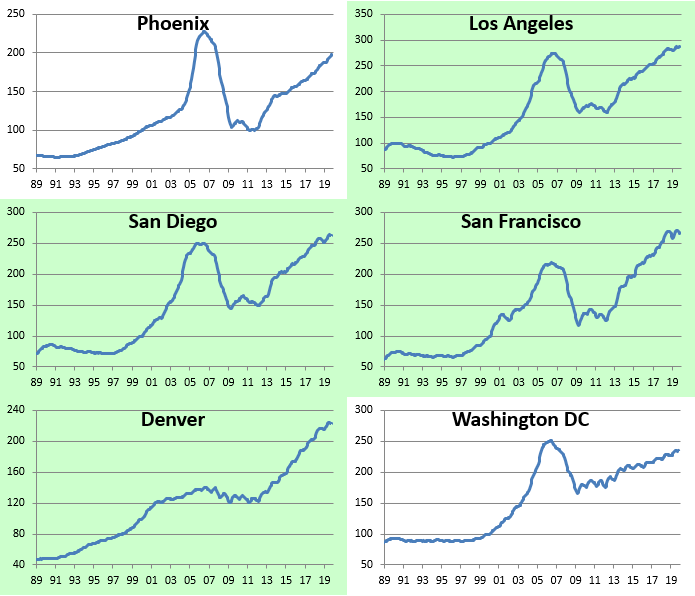 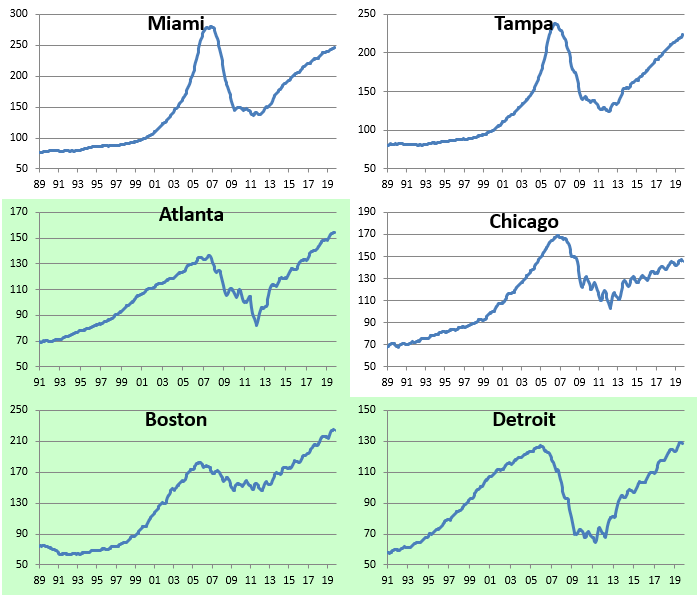 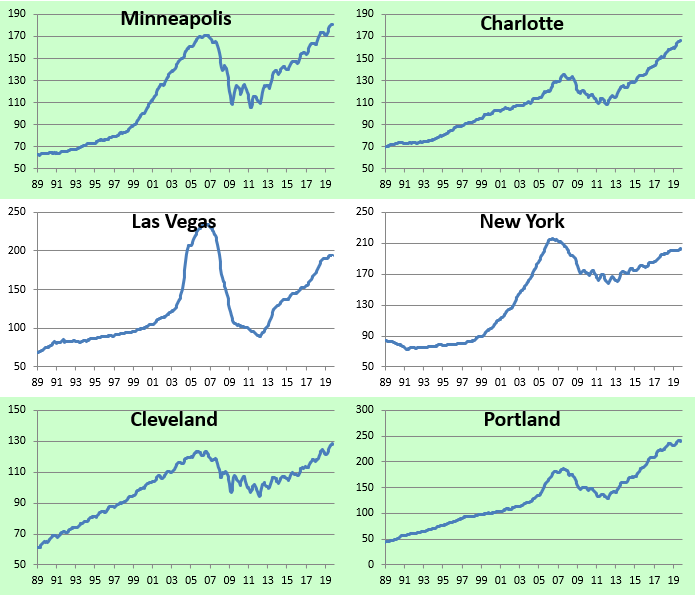 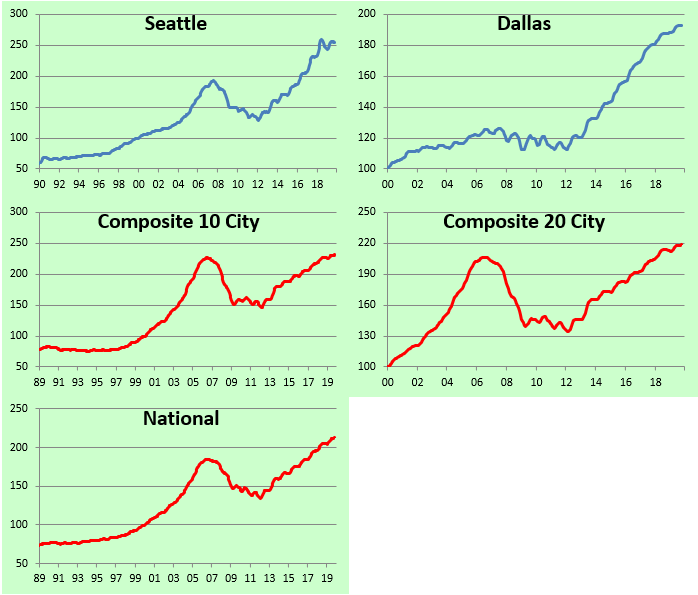