Our Daily Sector Snapshot does a great job of consolidating key fundamental, technical, and breadth info for the eleven major S&P 500 sectors.  Our trading range charts show the path of each sector over the last year with overbought and oversold levels overlaid with the sector’s price and 50-day moving average.  We also include relative strength charts which show how the sector has been performing versus the S&P 500.  When the relative strength line is rising, the sector is outperforming the S&P and vice versa for a falling line.

Both the Communication Services and Consumer Discretionary sectors are in uptrends and have broken out to new highs recently, but their relative strength versus the S&P 500 leaves a lot to be desired.  Communication Services has merely been performing inline with the S&P over the last year, while Consumer Discretionary fell off a cliff versus the S&P in the early part of Q4 2019 and has just started to recover. 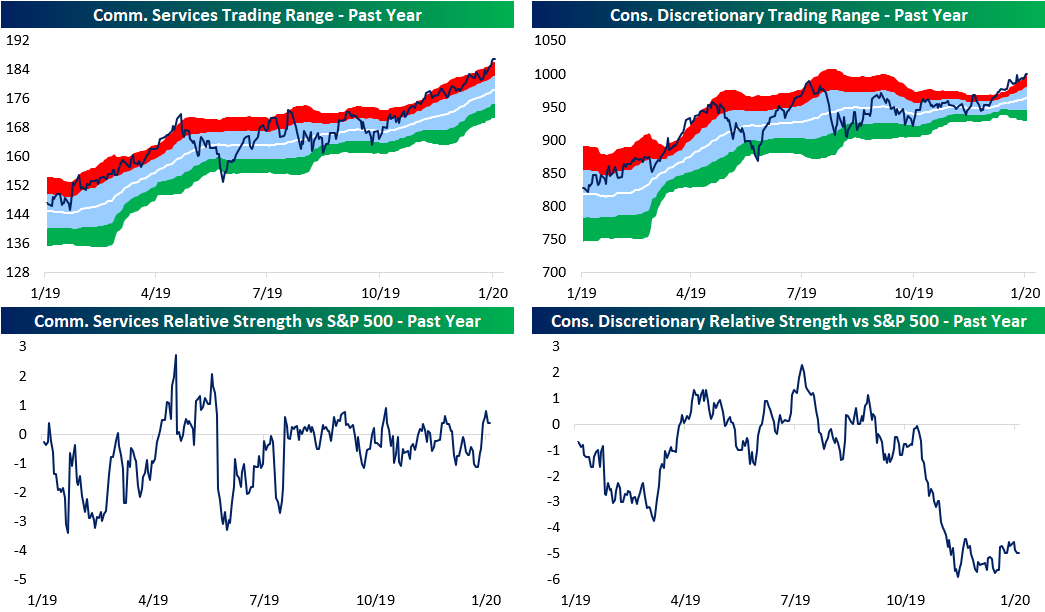 Consumer Staples performed well versus the S&P over the first two-thirds of 2019, but performance versus the market plummeted from late summer through year-end as the yield curve un-inverted and investors shifted into Tech, Health Care, and Financials.  Energy is the only sector that has not been in an uptrend for the better part of the last year, and thus its relative strength chart has basically been a straight path lower.  More recently, the slope of Energy’s relative strength decline has started to flatten, and we’ve seen some outperformance lately as geopolitical tensions heat up.  Even with the improvement, though, the sector still has a lot of work to do to turn around versus the rest of the market. 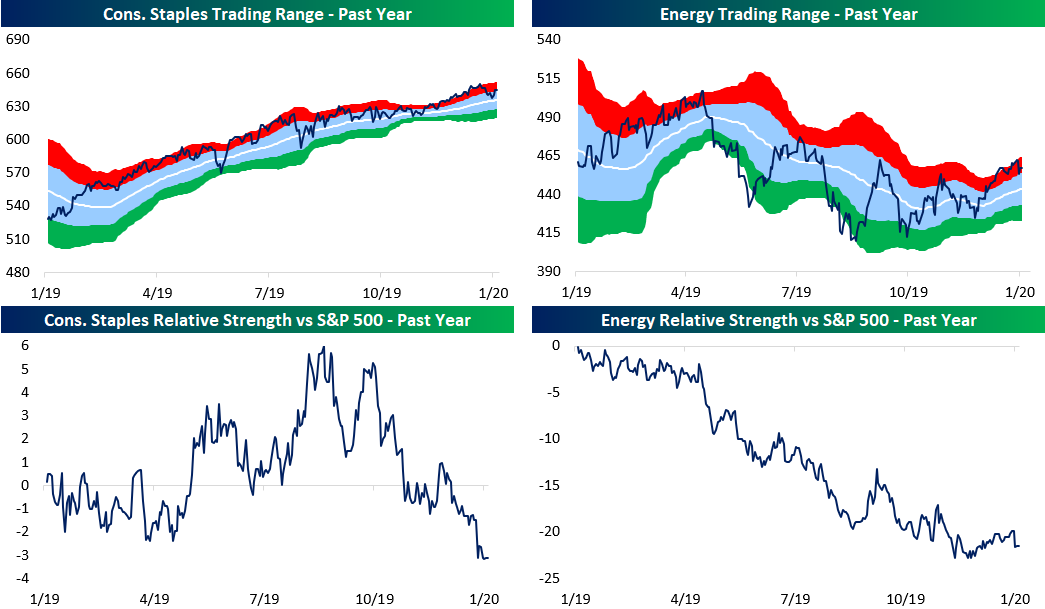 The Financial sector has performed exactly in-line with the S&P 500 over the last year, but things looked a lot worse in mid-2019 when the yield curve was inverted.  Once rates started to tick higher again and the slope of the yield curve turned positive in Q4 2019, the Financials really took off.  That shifted the sector’s relative strength from negative to positive, but over the last few weeks we’ve seen a slight downtick as the Financials have traded more sideways.

The Health Care sector has been on a tear for the last three months, but it hasn’t been enough to shift its relative strength back into positive territory versus the S&P over the last year.  The rise of Elizabeth Warren’s poll numbers held back Health Care in 2019, and once Warren’s numbers started to dip, the sector took off.  That’s the reason you see Health Care’s relative strength really picking up since making a low last October. 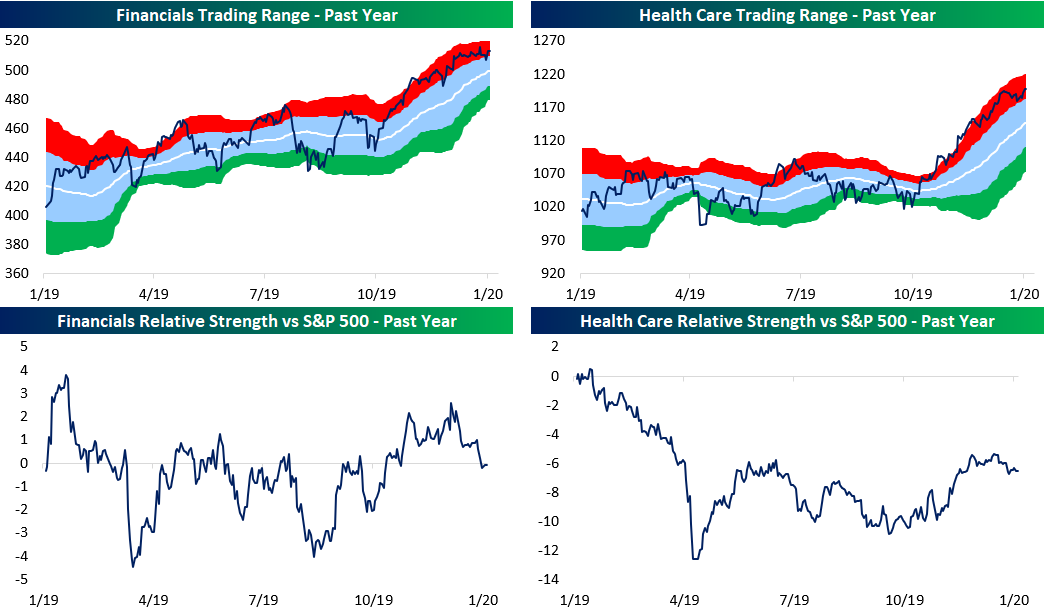 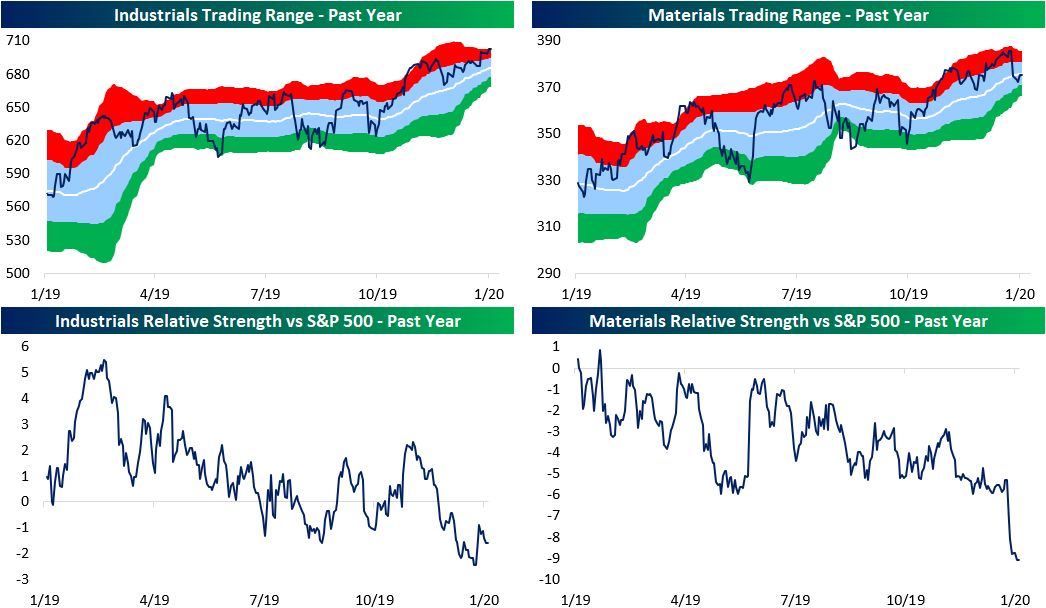 Real Estate (REITs) had very positive relative strength for most of 2019, but this rate-sensitive sector has struggled mightily over the last few months as the yield curve has un-inverted.  The price chart for Real Estate has broken its uptrend and is struggling to hang onto its 50-day moving average.  With the S&P in a steep uptrend, a near-term downtrend for a sector causes its relative strength chart to collapse.

Remarkably, the Technology sector is the only one with an upward sloping relative strength chart that’s solidly in positive territory.  This tells you that Tech has been the main (and only) area of true outperformance in the US equity space over the last year.  At some point this is sure to reverse, and when it does, the S&P is going to struggle given Tech’s weighting in the index. 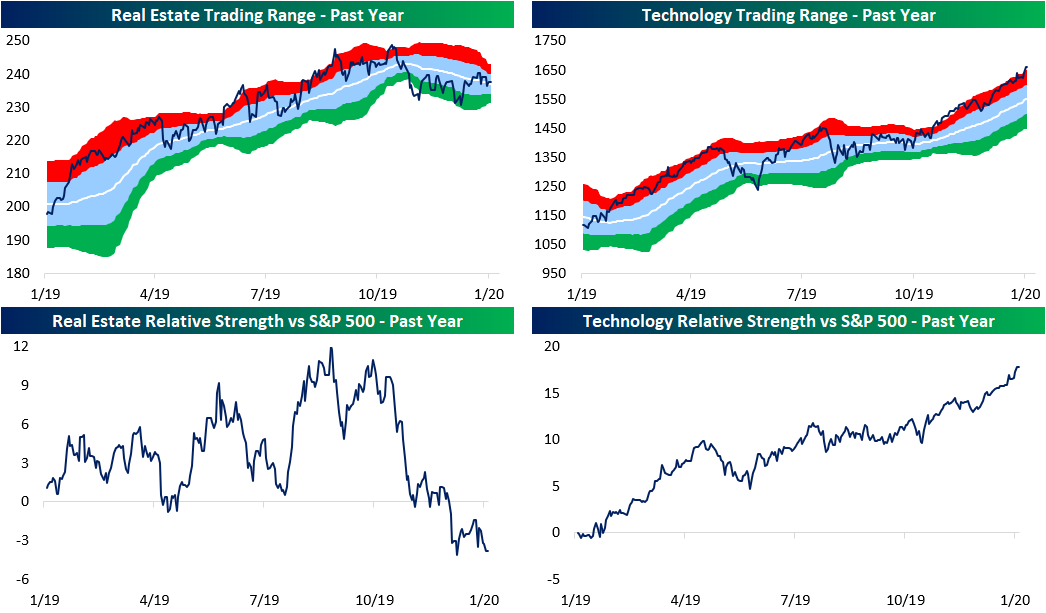 Relative strength for Utilities looks very similar to that of other defensives like Consumer Staples and Real Estate.  You saw strong outperformance for Utilities at the start of Q4 2019, but it has given it all back and then some since then.  To see our Daily Sector Snapshot and track these charts on a regular basis, start a two-week free trial to Bespoke Premium.  You’ll unlock additional investment research like our Morning Lineup, Model Portfolios, and Chart of the Day as well.