Two Months Without an Increase in Prices at the Pump

While consumers staying home have not had much of a chance to enjoy the decline in gas prices, the decline has been relentless.  The last time the national average price of a gallon of gas increased was on February 22nd.  That’s 59 days ago.  The chart below shows historical streaks where the national average price of gasoline did not show a day/day increase.  At 59 days, the current streak is the fourth-longest on record dating back to 2005.  The longest streak ended at 123 days in January 2015, while the next two ended at just under 90 days. 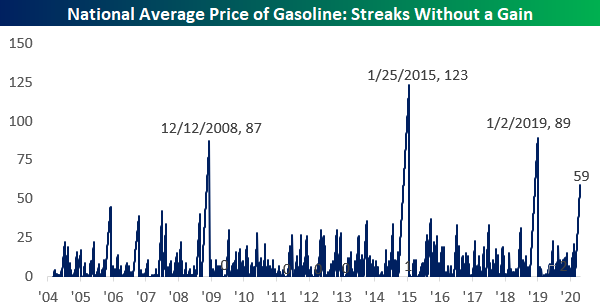 With the current streak of days without an increase at just 59 days, it sure doesn’t seem extreme relative to those other periods.  So what gives?  Even though the current streak is much shorter than the three longest streaks, this one is perhaps even more extreme given the time of year when it is occurring.  Looking at the chart above, each of the three longest streaks on record all ended in December and January. The blue line in the chart below shows the seasonality of gas prices throughout the year, and the weakest time of year is typically from the beginning of December through year-end.  Therefore, it shouldn’t be too much of a surprise that the three longest streaks on record took place during that time of year.  The current streak, however, has occurred during a time of year where prices at the pump are normally at their strongest.  In fact, this is the first time since 2005 that gas prices have ever been down on a YTD basis at this time of year.  In other words, this current streak of declines is rather extraordinary.  Start a two-week free trial to Bespoke Premium to access our full range of research and interactive tools. 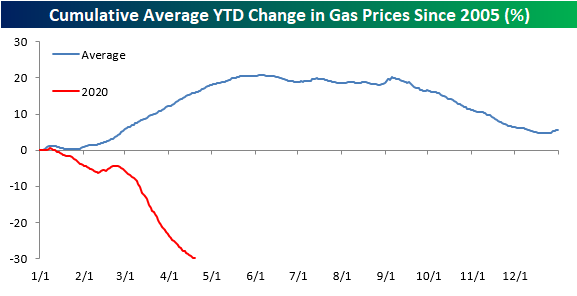