Turn Off, Tune Out

The first quarter of 2021 comes to a close today, and as fast as time seems to fly, it’s been a long one.  Take GameStop (GME).  It may seem like months and months ago, but it wasn’t until late January that the stock started to go crazy as the ‘Reddit Rebellion’ launched and caused a mad scramble by hedge funds to cover any and all of their short positions.  Think about it.  In under three months, we’ve seen at least two large funds (Melvin Capital and Archegos), not to mention the collapse of supply chain finance giant Greensill Capital.  Sometimes we go an entire year without blowups of this magnitude.

Despite the tumultuous headlines and market volatility along with the frustrating churn in the market lately, US equities are finishing off the quarter well.  Stocks in the S&P 500 are up an average of 11.9% so far this year and grouped by sector they’re all averaging gains.  Leading the way higher, stocks in the Energy sector stand apart from every other sector with an average gain of over 20%.  After Energy, stocks in the Financials and Consumer Discretionary sectors are both up an average of over 15%.  On the other side of the chart, sectors underperforming are generally defensive in nature with Health Care and Utilities both averaging YTD gains of less than 5%.  One notable underperforming sector given its size is Technology.  With an average gain of 7.2% YTD, stocks in the Technology sector are underperforming the broader market by more than 4.5 percentage points.

Given the underperformance of Technology YTD, we can’t help but remember some market ‘certainties’ over the years that never quite came to fruition.  Remember after the initial surge off the lows coming out of the Credit Crisis in 2008 and 2009?  While Financials were the best performing sector coming off the lows, the rally in the sector ran out of steam and stalled out.  All we kept hearing at the time was that ‘the market couldn’t rally without the Financials’, but rally it did.  Now, after Technology outperformed during COVID and through last Summer, the sector has stalled out, and we’re hearing the same phrase now as we did back then with the only difference being that Technology has replaced Financials as the sector that the market couldn’t rally without.  Since September 2nd though, when we first started to see the ‘Big Shift’ in the market, the S&P 500 has nearly tripled the return of the Technology sector, and despite Tech’s underperformance, the S&P 500 has still managed double-digit percentage gains.  When it comes to the old conventional wisdom of the market, investors would be best served by doing the opposite of Timothy Leary by ‘turning off’ and ‘tuning out’ all the noise. 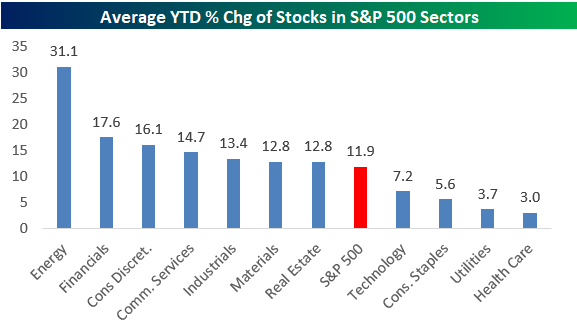 In the tables below, we list the top and bottom twenty performing S&P 500 stocks so far this year.  Starting with the winners, L Brands (LB) and Marathon (MRO) are both already up over 60%, while another five stocks have rallied 50%+.  With the exception of HollyFrontier (HFC), which is up 39.9%, every other one of the top 20 stocks is up over 40% – in just three months!  What’s most notable about this table, though, isn’t what’s on it, but what isn’t.  Technology has a larger number of components in the S&P 500 than any other sector, but only one stock from the sector – Applied Materials (AMAT) – made the list of top performers, and only one other besides AMAT (Hewlett Packard Enterprise) made the top 50. 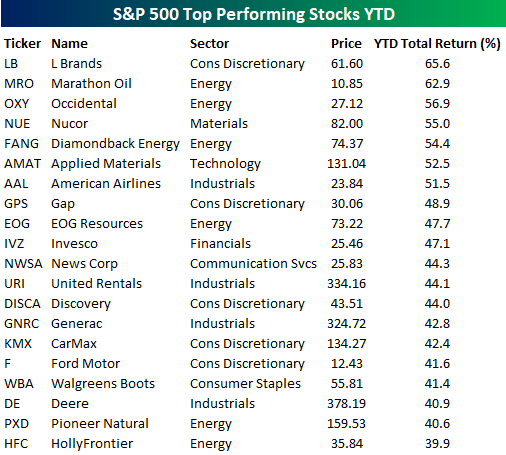 At the other end of the spectrum, there are only 13 stocks in the S&P 500 that are down over 10% YTD, and the 20th worst-performing stock is down less than 9%.  And while there was only little representation from the Technology sector on the list of biggest YTD winners above, there’s no shortage on the list of losers with eight of the twenty coming from that sector.  It’s only been three months, but stretching back to early last September, the market has gotten along just fine without the help of Technology.  Click here to view Bespoke’s premium membership options for our best research available. 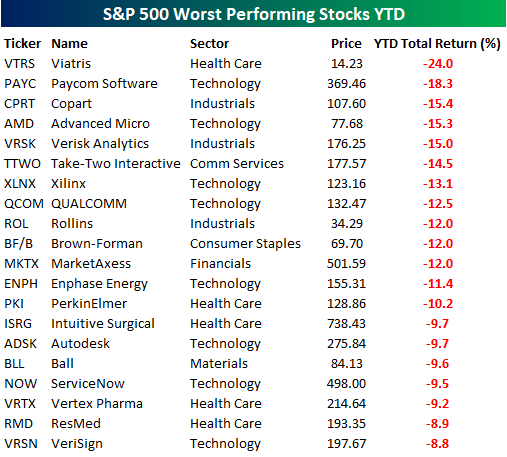