With year three of the current four-year Presidential Election Cycle coming to an end in six weeks, below is an updated look at the average performance of the S&P 500 in each year of the cycle going back to 1928.  As shown, years one and two have historically been weaker than years three and four of the cycle.  The S&P has been up 56.5% of the time in both year one and year two, but the index has been up 81.8% of the time in year three and 72.7% of the time in year four.  Year three has been by far the best year of the cycle with an average gain of 12.81%, and the playbook has stuck to the script in year three of the current cycle with the S&P up 24.5% year-to-date.  While year four has historically been consistently positive with gains 72.7% of the time, the average change for the S&P in year four (+5.71%) is just barely better than the average change in years one and two.

Below we show the S&P 500 under Trump so far versus a composite of the S&P four-year Presidential cycle.  The S&P gained 19.4% in year one of the current cycle versus an average year-one gain of 5.7%.  Year two is historically the worst year of the cycle with an average gain of just 4.54%, and in Trump’s second year, the S&P actually fell 6.2%.  So far this year, the S&P is up 24.5% versus the average gain of 12.8% during year three of the cycle.  As shown in the chart, year four generally trends positively but experiences pullbacks shortly after Q1 and again in October leading up the Election Day before closing out the year strong.  Sign up for Bespoke’s “2020” special and get our upcoming Bespoke Report 2020 Market Outlook and Investor Toolkit. 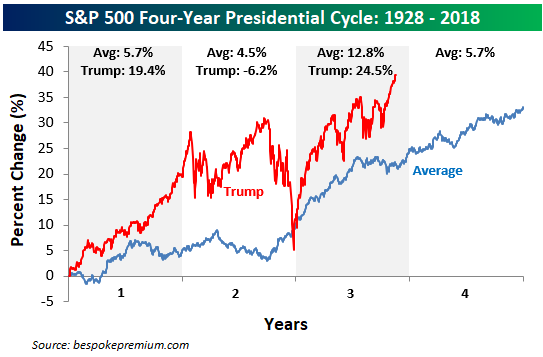