In yesterday’s Chart of the Day, we highlighted one of the most recent earnings triple plays, Prologis (PLD), as well as the other three triple plays so far this earnings season as of yesterday morning.  A stock reports an Earnings Triple Play when it beats consensus analyst EPS estimates, beats revenue estimates, and raises forward guidance. These can typically be considered the cream of the crop for companies reporting earnings as they not only show fundamental strength, but also see strong stock price reactions on earning days. As the earnings calendar continuously ramps up, another 54 companies reported since yesterday’s close and the number of triple plays has nearly tripled. There were seven triple plays since yesterday’s close bringing the total for this earnings season from four to eleven.

Below we show the charts of the stocks that have reported a Triple Play last night and this morning.  Teradyne (TER) and Texas Instruments (TXN) were both out yesterday after the close. For Teradyne, EPS was 30 cents above analyst forecasts of $1.03 while revenues came in at $839 million versus forecasts of $755.5 million.  TXN beat EPS by 27 cents. The company reported sales of $3.239 billion versus estimates of $2.952 billion. Both companies raised guidance for sales and EPS.  Despite those strong earnings, both stocks are trading lower today as they sit just off of 52-week highs.  For TXN, that turn lower marks a false break out above levels from earlier this year.

This morning’s triple plays include fiber optic cable manufacturer Amphenol (APL), industrial products conglomerate Dover (DOV), health information technology stock IQVIA (IQV), consumer packaged goods company Silgan (SLGN), and one of the US’s largest trucking companies Knight-Swift (KNX). Unlike TXN and TER, none of these stocks are trading lower and SLGN is up the most with a 7.56% gain as of this writing.  This was SLGN’s first-ever triple play with EPS of $0.85 vs $0.64 estimates and revenues ~$55 million above estimates. That has sent SLGN surging to fresh 52-week highs.  APH, DOV, and IQV are not quite there yet but they too are approaching resistance with help from earnings today. KNX on the other hand is in the middle of a strong uptrend since the March lows.

One other interesting thing to note, even though these companies are all reporting strong earnings in relation to estimates, most are not reporting growth from last year.  Of the eleven triple plays we have seen so far this earnings season, there are only four—Taiwan Semi (TSM), Prologis (PLD), Silgan (SLGN), and Teradyne (TER)—that have reported revenues higher than one year ago. Click here to stay updated on upcoming earnings triple plays and receive actionable research on everything else related to financial markets. 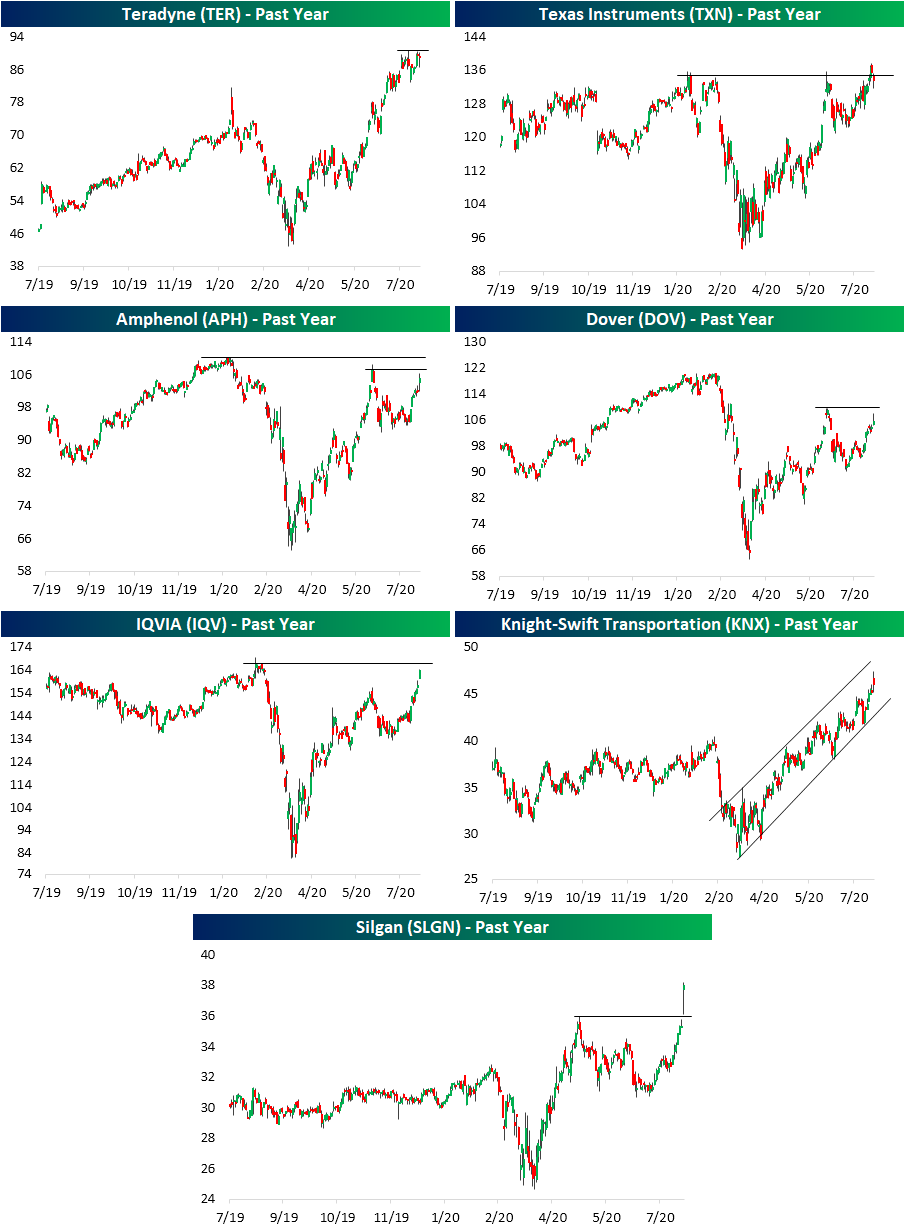