A triple play is when a company reports better than expected results on the top and bottom line while also raising guidance. We consider these to be the gold standard for earnings, generally speaking, as they indicate a strong fundamental picture relative to expectations. Since the big banks kicked off earnings, though, triple plays have been hard to come by with only 5 of 92 total reports having been triple plays, and those five stocks have averaged a 1.61% decline on their earnings reaction days; slightly worse than the 1.56% average decline for all stocks reporting earnings so far.

Expanding the time frame, in the chart below we show the percentage of stocks reporting triple plays on a three-month rolling basis similar to the charts of beat rates in our Earnings Explorer tool.  As shown, the pandemic has been a boon for triple plays as a result of a mix of pessimistic forecasts and strong rebounds. The percentage of stocks reporting triple plays over the past two years has been unlike anything in the history of our data going back to 2001.  With that said, gravity has been hitting the triple play rate as it is heads into the current earnings season at the low end of the range since the fall of 2020.

With triple plays more frequent, they appeared to have lost their luster with weaker full-day changes on earnings than what was observed for most of the time prior to the pandemic.  As the triple play rate has come down, stock price reactions have improved but are still on the weaker side relative to history. Currently, over the past three months the average triple play has rallied a little over 4% the day after earnings compared to 5.21% historically.  Click here to view Bespoke’s premium membership options.  You can monitor earnings triple plays on a daily basis with a Premium membership. 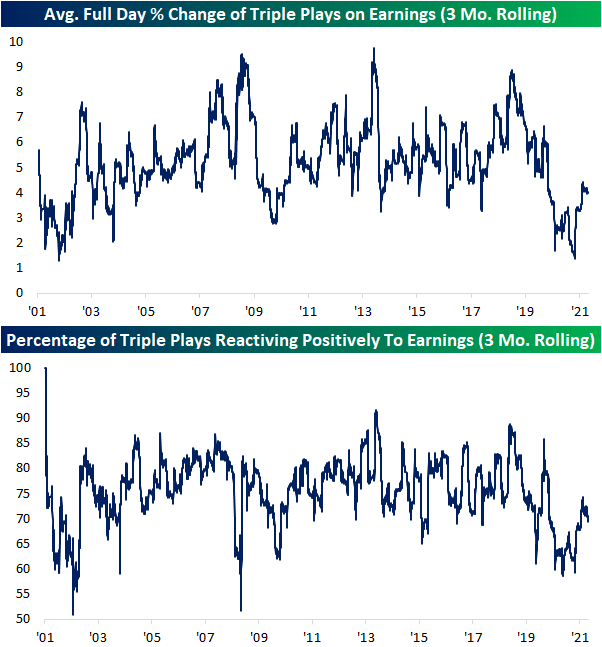