Back in August 2018, AAPL became the founding member of the trillion-dollar market cap club here in the US. In the time since then, membership has grown by five, though, only four other stocks currently have market caps above $1 trillion: Microsoft (MSFT) at $2.5 trillion, Google (GOOGL) at $1.95 trillion, Amazon (AMZN) at $1.7 trillion, and Tesla (TSLA) at $1.19 trillion. Facebook (FB) also crossed the $1 trillion threshold halfway through last year, but it has since turned lower. Yesterday, AAPL was the talk of the town as its market cap briefly touched above $3 trillion, though, those levels did not hold and the stock has still yet to close with a market cap above that level. While it has only spanned a few years’ time, there is now a decent sample size of stocks to look back on for past examples of how they perform after hitting the trillion-dollar market cap milestone.

In the chart below, we show the performance of the various mega-cap stocks following their first close with a market cap above $1 trillion (or $2 trillion where applicable).  Generally speaking, after reaching such a milestone, the general pattern has been some consolidation lasting upwards of a few months followed by a more consistent resumed uptrend one year out from the occurrence.  Amazon (AMZN) has averaged the strongest such response, though, its timing coincided nearly perfectly with the COVID crash (peak on 2/19/20) and the initial stages of the current bull run. Alphabet (GOOGL) is a similar story though it took longer to recover.

With regards to AAPL and the times it hit a $1 trillion and then a $2 trillion dollar market cap, the former instance saw an immediate strong reaction in the following months followed by weaker performance over the next 3 to 12 months. On the other hand, the more recent occurrence in which it crossed a $2 trillion market cap saw a brief spike higher over the next few weeks before moving back below $2 trillion for the span of a few months. That level would then offer support roughly six months later. Click here to view Bespoke’s premium membership options. 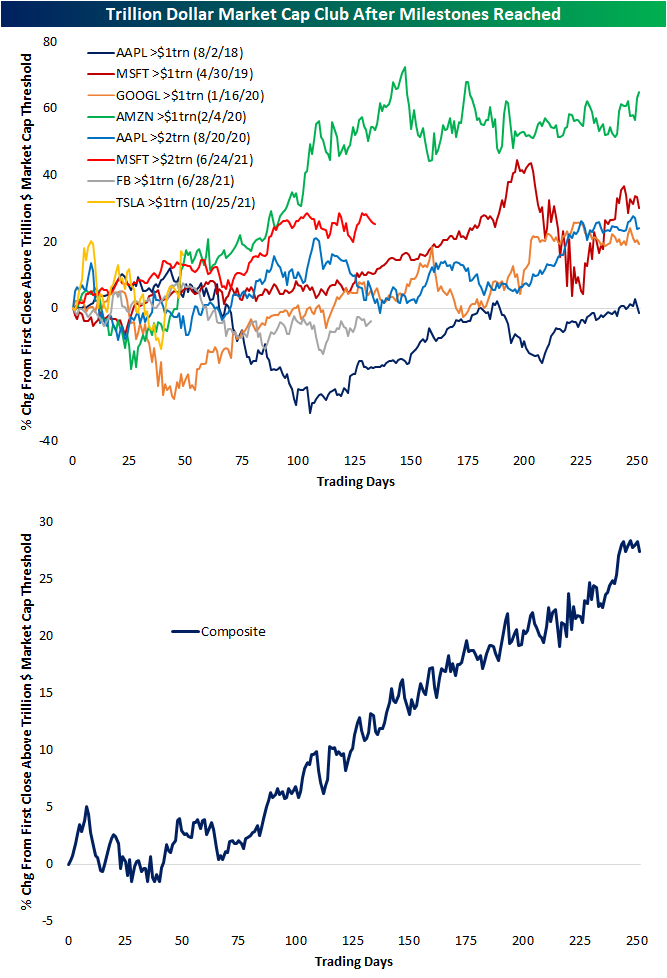