Treasuries Not Dancing To A Surging Inflation Tune

We’ve seen a lot of commentary suggesting that the recent increase in Treasury yields is being driven by a surge in fears over inflation. While it’s true that worries over inflation should drive bond prices down (higher yields), this recent episode isn’t consistent with that dynamic. In the chart below we show the change in the various segments of the UST curve since the end of October, in basis points. Higher readings indicate steepening, where a longer-term yield rises faster than a shorter-term bond yield. Generally speaking, Treasuries should steepen during inflationary episodes, with longer-term yields (more vulnerable to inflation) rising faster than shorter-term yields (more vulnerable to policy rate changes).

In the chart below we break the UST curve into 4 segments, each of which represents a certain kind of risk premium. Very short-term curvature is dictated by the Fed.  As shown, the 3m2y curve has barely moved, because markets generally see the risk of near-term Fed hikes as little-changed over the last four months. The 2y5y curve is similarly tied to Fed policy action, but is much more speculative.  As shown, this is where the biggest increase in yields has come.  Effectively, the market sees the Fed as much more aggressive in its tightening once it lifts off. The next segment is the 5-10 year curve, which is a mixture of risk premium for Fed policy, growth, and inflation.  The 5s10s curve has seen rapid steepening, but the long end of the curve (10s30s), which is most sensitive to inflation, hasn’t budged.  If inflation concerns were surging, 10s30s would not be stable over the last few months.

We’ve also included on the chart market pricing for inflation over the five years starting five years from today. While we discourage investors reading too much into this metric as a forecast, it does represent a risk premium for inflation. As shown, this metric for inflation pricing has dropped considerably as yields have risen. 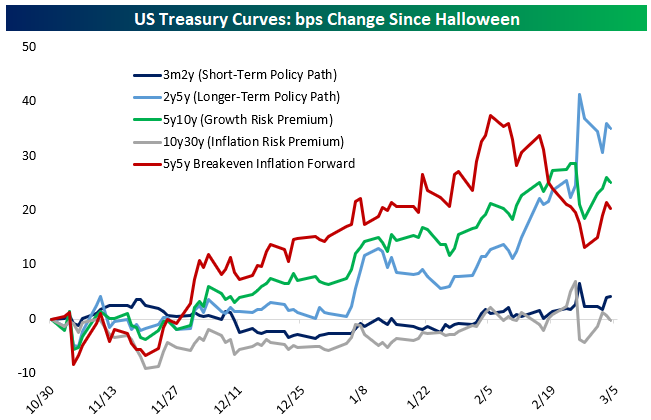 What to make of all this? In our view, the narrative that markets are worried about inflation is inconsistent with Treasury market movements in recent weeks. Instead, we see a market that is pricing in a much tighter Fed once interest rates do start to rise. Whether that will prove true or not is an open question, but what we can say is that inflation expectations are unlikely to be driving bond selling given where changes in yield are taking place on the curve and the performance of inflation pricing over the last few weeks.  Interested in fixed income and macro analysis like this post? Click here to start a free trial of Bespoke Institutional to get immediate access to our nightly Closer and Fixed Income Weekly which focus on these markets.