After a massive surge on earnings, salesforce.com (CRM) finished last week up over 30% on the week which left it as the most overbought stock in the S&P 500 as shown in the snapshot of our Trend Analyzer below.  While Technology stocks seeing strong performance has been a staple of the new COVID economy with other strong recent performance and extremely overbought readings from names like Adobe (ADBE) and Microsoft (MSFT), there is another interesting dynamic of the stocks that are currently the most overbought in the index. 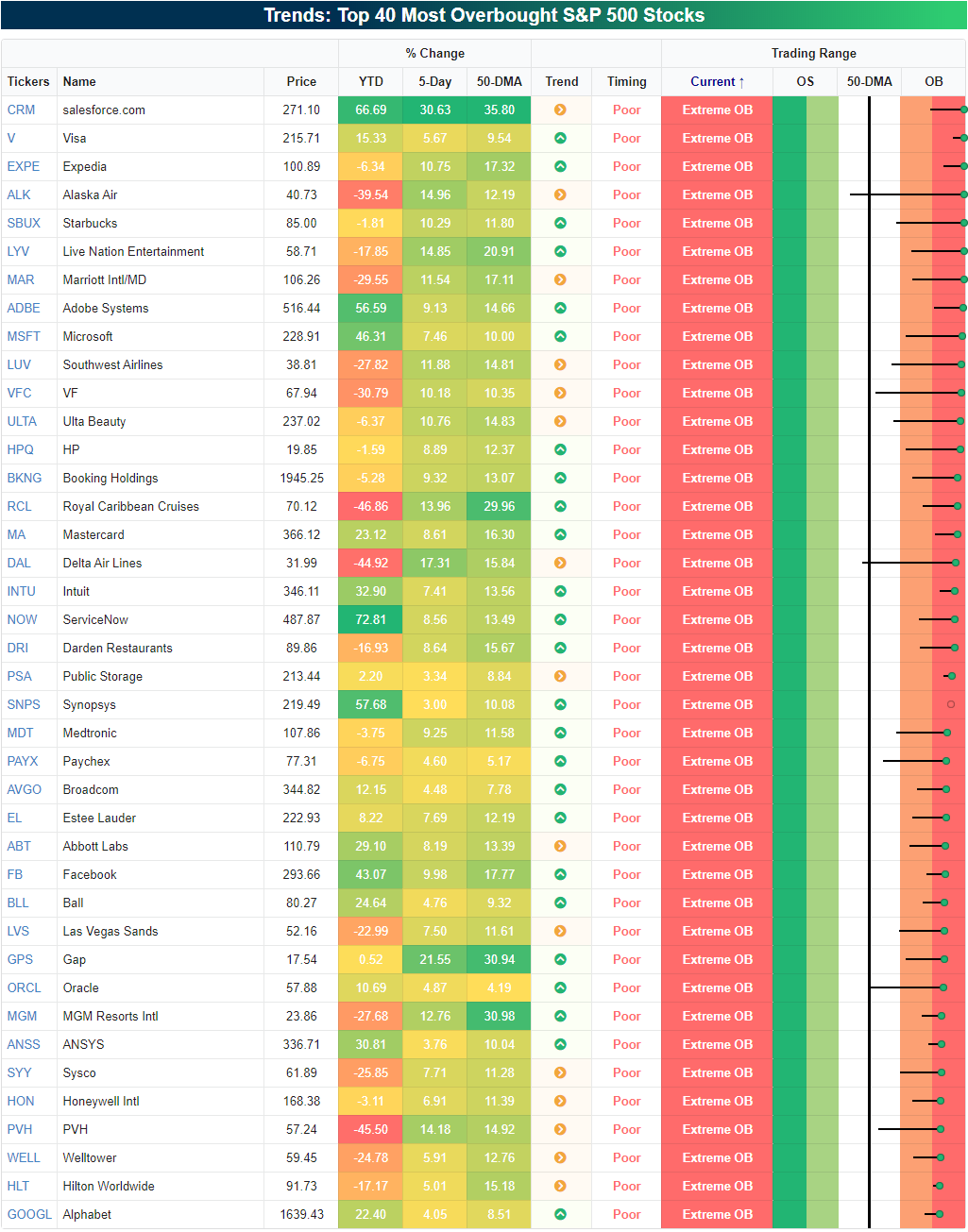 As shown in the snapshot of our Trend Analyzer above as well as in the following table, the 40 most overbought stocks in the S&P 500 have a large representation of re-opening stocks.  These names include many travel-related stocks like Expedia (EXPE) and Booking Holdings (BKNG) as well as other travel adjacent names such as hotels and resorts: Marriott (MAR), Hilton (HIL), Las Vegas Sands (LVS), and MGM Resorts (MGM)—Wynn Resorts (WYNN) is not included on the list but just missed as the 41st most overbought stock in the S&P at the moment. Airlines like Alaska Air (ALK) and some restaurants also find themselves in this group of extremely overbought reopening stocks with representations from Darden Restaurants (DRI) and Starbucks (SBUX).  As shown, these extreme overbought readings come on double-digit gains for many of these names over the past week alone, and that is on top of already strong performance since the bull market began.  Whereas many of these were the hardest hit (in the bottom 50 worst performing stocks) during the bear market running from February 19th to March 23rd, since the new bull market began on March 23rd, some of these same stocks have been the top performers in the index. For example, MGM Resorts was one of the 20 worst performing stocks from 2/19 through 3/23, but since 3/23 it has been the ninth-best performer in the index.

Given that these stocks are currently extremely overbought, this may not pose as the most opportune time to jump in on them, but the charts have been at or approaching interesting levels.  In the charts from our Chart Scanner below we show 12 of these stocks. Each one has been in a solid uptrend since the bear market low with highs being put in place back in late spring.  With respect to those spring highs, it is a mixed picture.  While some stocks like Delta Air Lines (DAL) and Hilton (HIL) have yet to move above those prior highs, others like Booking Holdings (BNKG) and MGM Resorts (MGM) have begun to make new highs.  Click here to view Bespoke’s premium membership options for our best research available.