An earnings triple play is when a company raises guidance, beats EPS estimates, and beats sales estimates.  Long-time Bespoke readers know that we’ve been following triple plays since our inception back in the mid-2000s.  Investopedia.com has even given the triple play its own entry, providing credit to Bespoke for coming up with the term.

Below is a list of the triple plays registered either after hours yesterday or in the pre-market this morning.  While four of them are trading nicely higher — Leidos (LDOS), Merck (MRK), NeoGenomics (NEO), Xerox (XRX) — the biggest bust on the list by far is Beyond Meat (BYND).  Even with an earnings and sales beat and increased forward revenue guidance, BYND is set to open down nearly 20% this morning supposedly due to concerns about pricing and increased competition and the end of the employee lock-up period.

Things couldn’t get any better for Beyond Meat (BYND) in the early days following its IPO.  You probably remember that shares pretty much couldn’t go down during the summer months, and they were seemingly closing higher by 10-20% every day for a few weeks!  After pricing at $25/share at its IPO on May 1st, BYND shares reached their peak of $234.90 on July 26th — a ridiculous gain of 840% in less than three months!

Since peaking just over three months ago, though, it has been straight downhill.  Based on where shares are trading in the pre-market, BYND will be down 63.7% from its high and only up 29.7% from where it opened on its first day of trading on the secondary market.  Start a two-week free trial to Bespoke Institutional for full access to some of the most sought after research on the street. 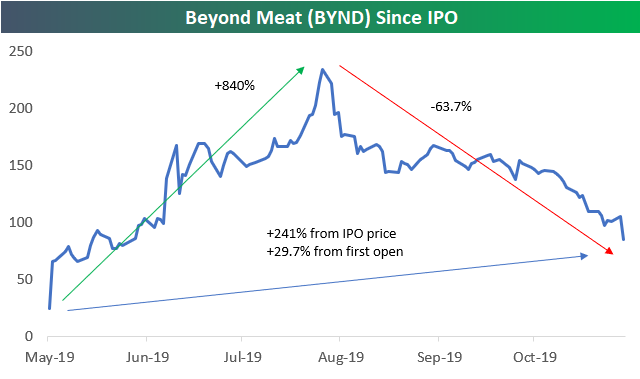