It’s not too often that we have the opportunity to invoke the name of a Vanilla Ice album to describe the market, but after the last five weeks of trading, US equities have reached overbought levels “To the Extreme.” While the escalating violence in Hong Kong and doubts over whether the US and China can come to even a phase one trade agreement are two reasons being cited for this morning’s weakness in equity futures, just as important is the fact that US markets are heading into the week at not only ‘Overbought’ but ‘Extreme Overbought’ levels.

As shown in the image below from our Trend Analyzer, eight of the fourteen US index ETFs we track closed out last week at ‘Extreme Overbought’ levels.  As a result, all eight of these indices have ‘Poor’ timing scores.  Mid and small-cap indices may not be as extended as their larger-cap peers, but they too are all overbought.

While US indices, in general, are broadly overbought, among individual sectors, the strength hasn’t been nearly as one-directional.  Here again, the majority of sectors closed out last week at ‘extreme’ levels, but in this case, five sectors are at extreme overbought levels and another two (Utilities and Real Estate) are at extreme oversold levels.  Just last week, sectors like Real Estate (XLRE) and Utilities (XLU) saw declines of over 3.5%, while Financials (XLF) and Energy (XLE) were up close to 2.5%.  It’s not often that you see such wide performance divergences among individual sectors, but the spike we’ve seen in interest rates over the last couple of weeks has hurt rate-sensitive defensives and helped Financials especially.

Like US indices, international markets also finished off last week mostly at overbought levels after two-thirds of the country ETFs we track saw gains for the week.  Countries heading into the week at the most extended levels include Malaysia (EWM), Israel (EIS), China (MCHI & GXC), Italy (EWI), Russia (RSX), and Singapore (EWS), and behind these countries all but six ETFs are overbought.  China and Russia may be at extreme overbought levels, but Brazil (EWZ) and India (PIN), the other two countries that comprise the BRIC acronym, both traded down sharply last week and head into this week at neutral levels relative to their trading ranges. Sign up for Bespoke’s “2020” special and get our upcoming Bespoke Report 2020 Market Outlook and Investor Toolkit. 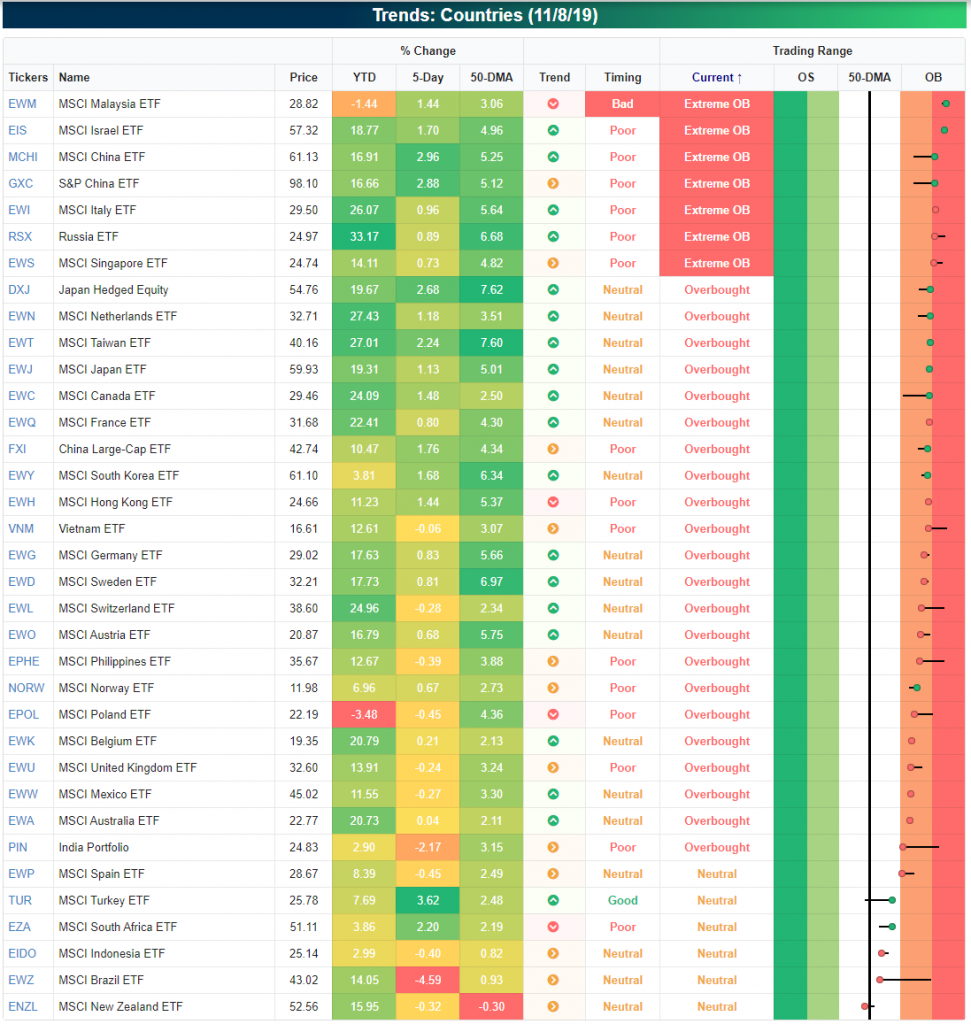