Time to Watch the Paint Dry

July 4th is less than a week away and as Americans look to celebrate Independence Day, they will be taking significantly less time out of their day looking at the stock market.  At least that’s the takeaway that comes with looking at average volumes during this time of year.  The matrix below shows the median daily volume of the S&P 500 ETF (SPY) as a percentage of its 200-DMA for each day of the year going back to 1993.

The end of June typically has above average volumes which is not unheard of for not only month-end but also the end of the quarter.  But once the calendar flips over into July, volumes typically dry up.  July marks the second-worst first day of a month for volume in SPY; the worst is May with median volumes 2.78% below the 200-DMA. Leading up to the July 4th holiday, volumes plummet. In fact, the median volume on July 3rd has been less than half the 200-day average. The one caveat here is that when the stock market is open on July 3rd, it is usually a shortened session. The only other day of the year where median volume in SPY is further below its 200-DMA is December 24th, another half session.  Turning back to July, volumes tend to remain below average throughout the rest of the month and through August as well with only a handful of above-average volume days.  In fact, with just four days in the month where median volume is above its 200-DMA, July tends to have fewer above-average volume days than any other month.  Click here to view all of Bespoke’s premium membership options and for a trial to any of our tiers of service. 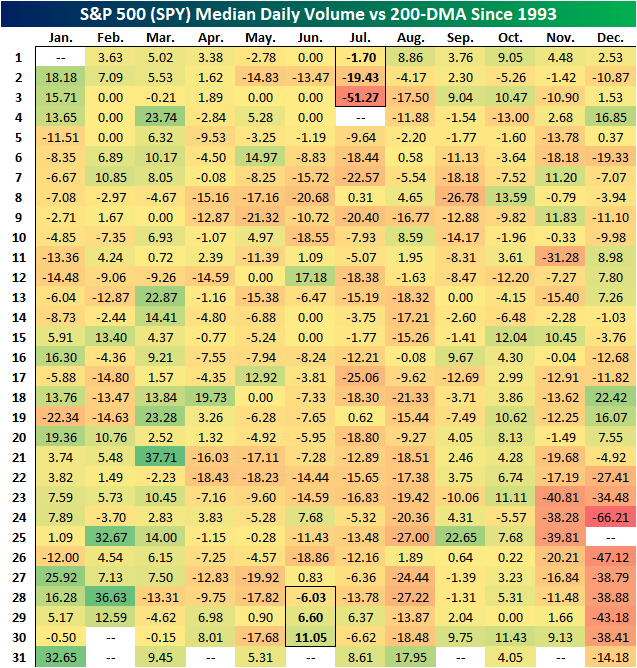