Lumber prices have continuously been in focus over the past several months as the commodity has gone on a historic run, but over the past month, front-month lumber futures have collapsed over 40% with an 11.7% decline in the past week alone.  Today the commodity is seeing a bit of a bounce after coming within 10% of its 200-DMA at the intraday lows and the bottom of the volatile uptrend of the past year. 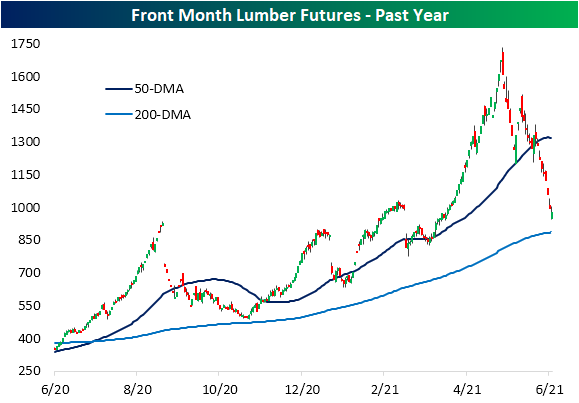 As lumber prices have been on the decline, mortgage rates have also generally been on the decline, but that has done little to bolster homebuilder sentiment. While it is still at historically elevated levels, the NAHB’s reading on homebuilder sentiment has also been falling, dropping another 2 points in June to 81.  That is still well above any pre-pandemic record, but that drop in addition to the past few months of declines have brought it to the lowest level since last August.

The indices for present and future sales and traffic all experienced identical-sized declines in June.  While not to say it is a weak reading, the index for future sales is only in the 91st percentile of readings which is less elevated within its respective historical range than present sales or traffic. 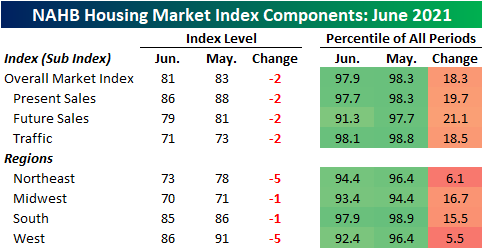 Looking across each of the four regions highlighted in the report, it is more of the same story.  Sentiment remains at historically strong levels although off of records set several months ago.  The region that has held up the best has been the South.  While also lower month over month, the index tracking this region only fell 1 point in June and remains in the 97th percentile.  The Midwest saw an equal-sized decline, but that is in the context of a more consistent string of declines since late last year.

As for homebuilder stocks, as proxied by the iShares Home Construction ETF (ITB), there has also been a downtrend over the past month with the ETF dropping around 13.5% from its intraday high on May 10th.  At the moment, ITB is in a bit of no man’s land between its 50 and 200-DMAs and also has further downside until it tests the past year’s uptrend line.  Click here to view Bespoke’s premium membership options. 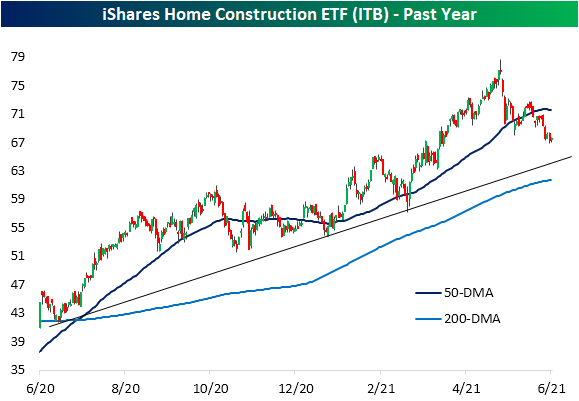