Last week was a strong one for economic data with more than half of releases either beating estimates or improving from the prior period for those with no forecasts. The Treasury’s monthly budget statement was the only release on Monday, and it showed a massive increase to the deficit. Small business optimism tipped back above 100 the following day, also coming in above expectations of 97.8. CPI was the other major release on Tuesday.  More inflation data followed up with import and export prices on Wednesday. Both showed further declines in June.  The New York Fed’s Manufacturing reading for July exceeded estimates, rising to 17.2 while the neighboring Philly Fed showed a slight decline from 27.5 24.1. June’s Retail Sales report for June showed strong growth in sales across the board with both the headline and core measures beating estimates. Homebuilder sentiment was also strong in a later release that same morning, rising from 58 to 72. Some disappointing housing numbers rounded out the week with misses for both starts and permits. 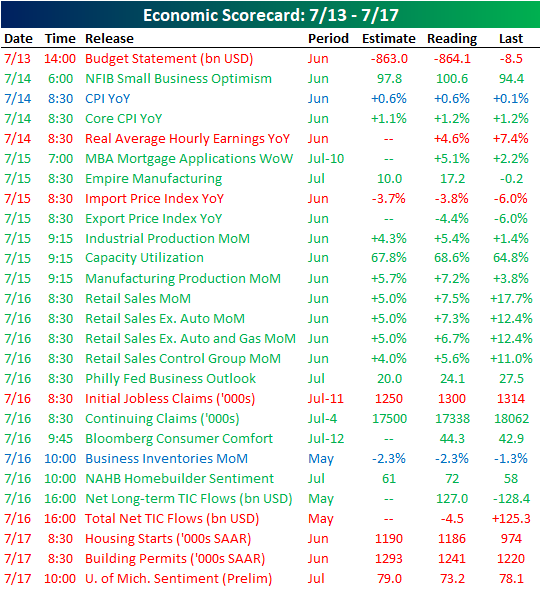 This week, economic data will take a backseat with a lighter calendar as earnings take center stage. Although there was nothing released today, there are a dozen releases scattered throughout the rest of the week. Included in these releases will be more housing data in the form of new and existing home sales and FHFA home prices, claims, the Kansas City Fed’s activity index, and preliminary Markit PMIs. Click here to view Bespoke’s premium membership options for our best research available. 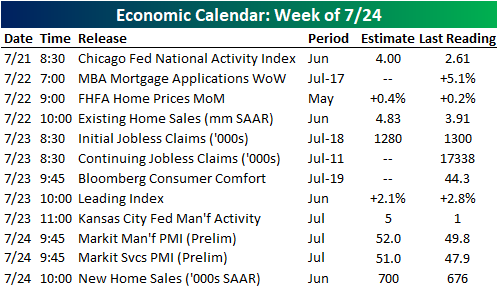