US economic data is beginning to show adverse effects from the coronavirus with several indicators doing so in dramatic fashion. About half of last week’s 30 releases came in worse than expected or than the prior period. Bloomberg’s weekly consumer comfort was one of the first releases of the week out on Tuesday. The headline index fell from 63.0 to 59.7, its largest one week decline since August of 2007. Markit’s preliminary PMIs for the month of March were released at the same time on Tuesday. While the reading on manufacturing did not fall as much as expected, it still came in with a contractionary reading which was also the weakest on record. The services counterpart on the other hand fell to 39.1 which was worse than the consensus forecast of 42 as well as a record low. MBA’s weekly mortgage applications came out the next morning falling 29.4% week-over-week; the largest decline since 2009. That was just a couple weeks after one of the strongest readings on record. Preliminary durable and capital good numbers were also released on Wednesday with core measures all showing declines in February. The biggest release of last week which we discussed on Thursday was jobless claims which more than doubled expectations of 1.5 million claims. 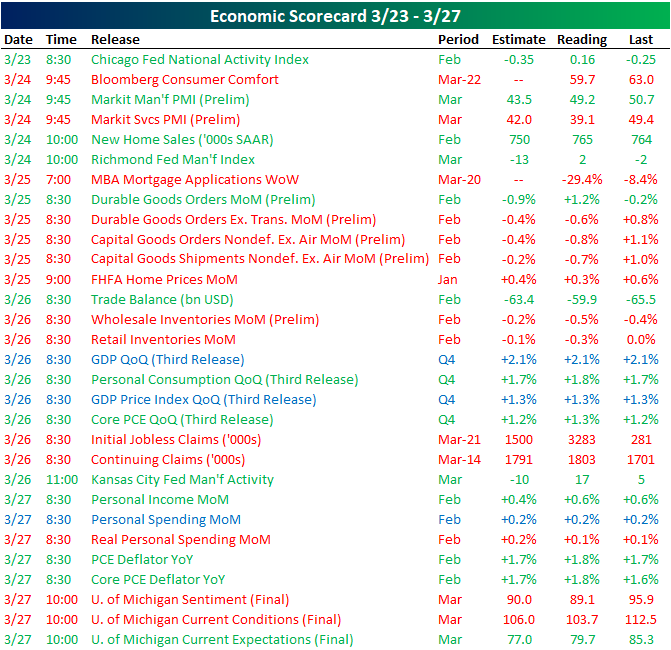 Turning to this week, we are likely to see more large swings in economic data as more February and March prints continue to come in. The Dallas Fed’s reading on the manufacturing sector and pending home sales were both out earlier this morning.  While pending home sales held up reasonably well in February, the Dallas Fed’s index for March plummeted to a record low of -70. If Bloomberg’s weekly readings have been any indication, consumer sentiment as seen through the Conference Board’s indices is likely to take a major hit when they are released tomorrow morning.  Forecasts are currently predicting a reading of 110 for the headline number which would be the sixth largest MoM decline on record.  Following weak preliminary readings last week, final Markit numbers for March will also be out later this week with further declines penciled in. ISM’s manufacturing and non-manufacturing indices are also due out the same days. Labor data will once again be a hot topic this week with jobless claims once again expected to read in the millions. Additionally, the Nonfarm payroll number on Friday is expected to show the first negative reading in nearly a decade. Start a two-week free trial to Bespoke Institutional to access our interactive economic indicators monitor and much more. 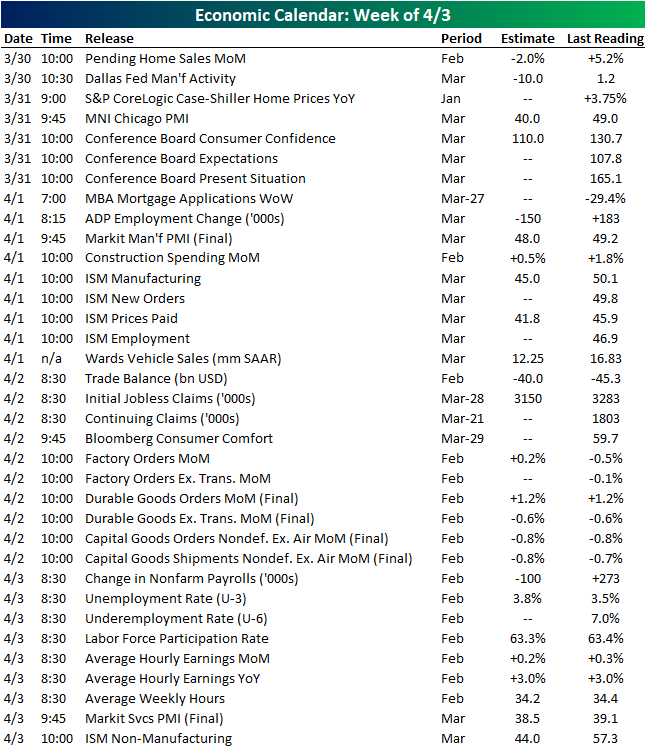