Economic data generally continues to remain of lesser importance than headlines due to the backward looking nature of the information, but recent indicators are beginning to reflect changes as a result of the coronavirus.  Last Sunday night, the Fed kicked off the week with a return to ZIRP. Then on Monday, the New York Fed’s reading on the region’s manufacturing businesses posted its largest one month decline on record and its worst reading since the financial crisis. The Philadelphia Fed’s survey later in the week similarly deteriorated rapidly as it experienced its largest one month decline on record. These two surveys set a very negative tone for the other three regional Fed surveys scheduled to release this week and early next week. Last week’s retail sales were dramatically weaker than expected with every measure outside of the control group (which was flat in February) declining month-over-month.  Homebuilder sentiment and other housing data like starts and existing sales also remained propped up thanks to lower interest rates, though, as rates have risen more recently that picture could subside a bit as was the case with last week’s mortgage applications. Finally, one of the most timely indicators, weekly jobless claims, spiked to 281K as an increased number of US workers remain quarantined at home. 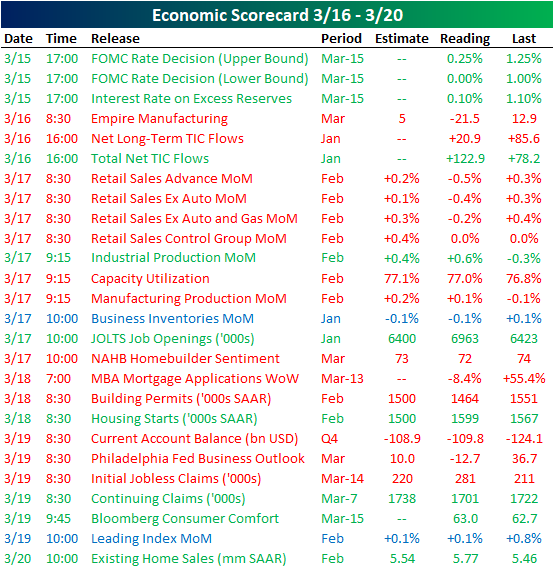 While claims have generally been one of the most widely watched indicators of late, this week they are sure to take center stage as forecasts are calling for an increase of 1.4 million as more and more businesses halt operations. Though it is not likely to show coronavirus effects in the same way, elsewhere in labor data, we will get personal income and spending numbers this week.  Following up on the NY and Philly Feds’ weak readings, the Richmond and Kansas City Feds will be releasing their respective manufacturing indices. Each one is expected to fall significantly to -10. Elsewhere in manufacturing data, Markit’s preliminary PMI is expected to fall into contraction territory alongside the services counterpart which had already fallen below 50 in February. Preliminary manufacturing hard data is also scheduled to release this week and is expected to decline MoM across headline and core measures. On the consumer front, University of Michigan sentiment is scheduled to round out the week with a decline to 89.5 from 95.9. Quarterly GDP data is also set to be released this week, but is one of the more lagged indicators and as such will only show the picture of a pre-coronavirus world. Start a two-week free trial to Bespoke Institutional to access our interactive economic indicators monitor and much more. 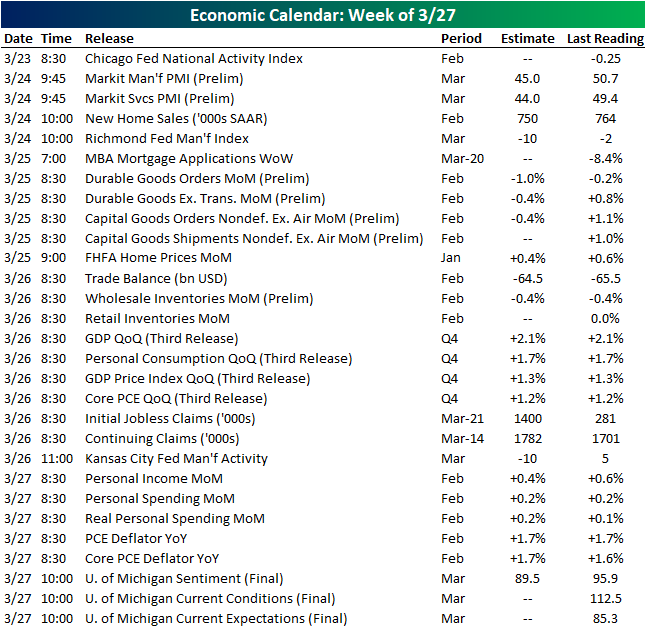