On top of a busy week of earnings, last week also saw 32 economic releases scattered throughout the week, a majority of which came in stronger than expected or stronger than the prior period’s reading. January Markit and ISM gauges on the manufacturing sector led things off on Monday with both improving from December and exceeding estimates. Service counterparts later in the week showed similar improvements and beat expectations. Hard manufacturing data on Tuesday confirmed these results with the December readings on factory orders, durable goods, and capital goods all exceeding or matching expectations, albeit capital goods and durable goods excluding transportation continue to decline month-over-month. Employment data was the highlight of the week with ADP’s reading on Wednesday showing the strongest print since May of 2015 and the biggest beat relative to expectations since December 2011. That was followed by Initial Jobless Claims which came in at their lowest reading since April’s multi-decade low, and finally, Friday’s all-around solid NFP report. 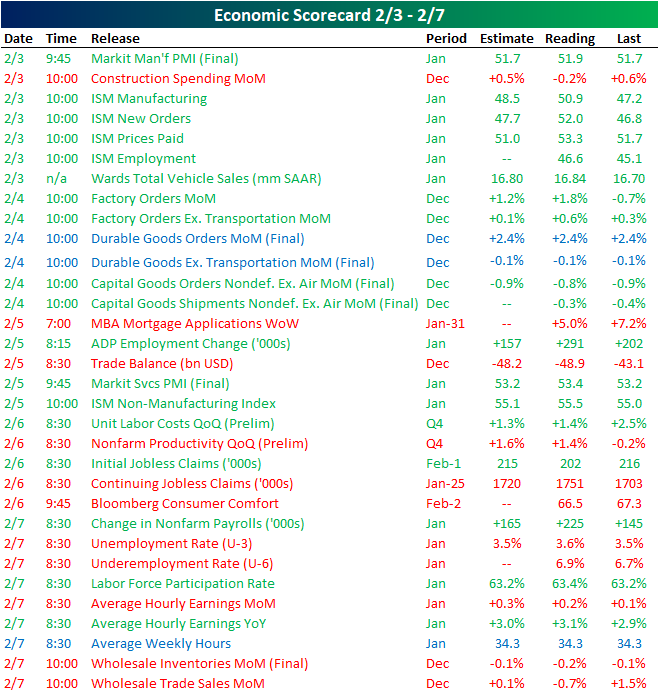 This week, the economic calendar lightens up a bit with a total of 22 data points on the docket. The calendar is back-end loaded with 18 of those 22 data points coming out on Thursday and Friday. As such, there are no releases today so small business optimism from the NFIB kicks things off tomorrow morning. Optimism among small businesses is expected to tick up to 103.5 from 102.7 which would leave it in the middle of the past year’s range. The December Job Openings and Labor Turnover Survey (JOLTS) is the only other release scheduled for Tuesday which is expected to show 6,925,000 job openings in December. Wednesday will likewise be a fairly quiet day with weekly mortgage applications and the budget statement for the month of January the only releases to note.

Again, things will pick up on Thursday and Friday. In addition to the usual weekly releases (jobless claims and Bloomberg Consumer Comfort), on Thursday we will also get hourly earnings and CPI data for January. CPI is expected to be stronger on the headline level but core measures are expected to slow to a 2.2% YoY rate from 2.3% last month. Export and import price indices are out Friday morning alongside the retail sales report for January. Although there is no change expected from December’s data, core measures on sales across the board are forecast to come in weaker. Industrial and manufacturing production are also scheduled to release that morning in addition to preliminary readings for February for the University of Michigan’s Consumer Sentiment index.  Start a two-week free trial to Bespoke Institutional to access our interactive economic indicators monitor and much more. 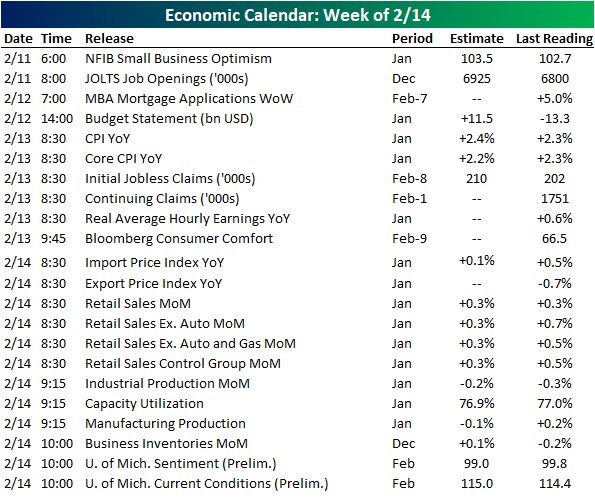