Despite the move in equities to all-time highs, recent economic data has had a tinge of weakness. Of the 25 releases last week, 13 came in worse than expected or the previous reading while 9 were stronger. The remainder matched expectations or were unchanged. Due to the Veterans Day holiday shuttering government agencies and many other organizations in the US on Monday, the first release of the week, and sole release on Tuesday was the NFIB’s Small Business Optimism. The index rose to 102.4 from 101.8, exceeding expectations of a rise to 102. Activity picked up on Wednesday with CPI and the monthly budget statement. While headline CPI rose more than expected at 1.8% MoM, core measures weakened.  Likewise, PPI (released the following day) was stronger at the headline level, but the core measure taking out food, energy, and trade services was weaker than the September print. Labor data was mixed this week with initial jobless claims coming in at a recent high while continuing claims met expectations. Real average hourly earnings were unchanged. Friday was the busiest day with Empire Manufacturing, retail sales, and industrial production. Most of this manufacturing data was worse than expected with the exception of manufacturing production. Granted, it still contracted -0.6% MoM which was still worse than the -0.5% in September. 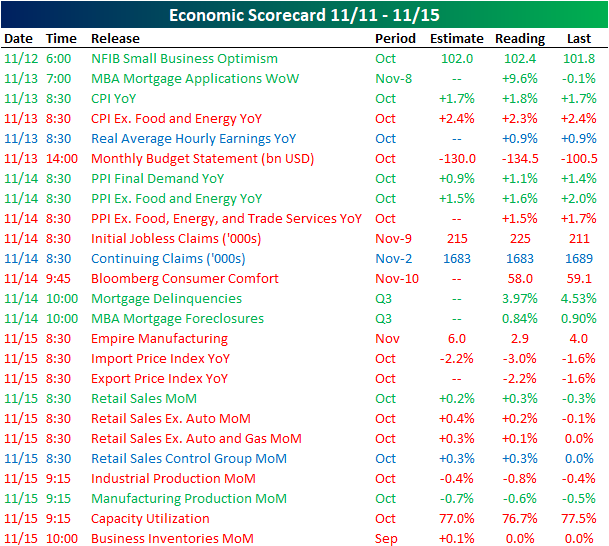 Turning over to this week, the calendar is a bit light with just 17 releases scattered throughout the week. It will be a busy week for housing data with homebuilder sentiment leading off today.  Data on housing starts, permits, mortgage applications, and existing home sales all follow up later in the week. In manufacturing, we will get the next two regional fed indices from the Philly Fed and Kansas City. On Friday, we will also get preliminary November Markit PMIs.  Start a two-week free trial to Bespoke Institutional to access our interactive economic indicators monitor and much more. 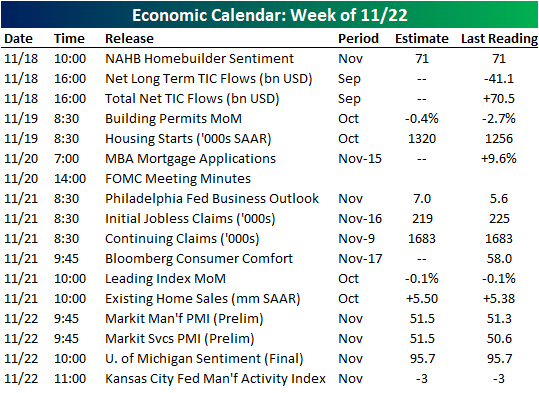