In spite of the focus on earnings last week, there was still a decent amount of economic data; two-thirds of which came in either weaker than expected or weaker versus their prior reading.  Due to the Columbus Day holiday, Empire Manufacturing was not scheduled to release until Tuesday, but it was accidentally published midday Monday stronger than expected.  Other manufacturing data released last week included the Philadelphia Fed’s manufacturing index and Industrial Production which all were weaker than expected. There were no releases on Tuesday but things picked back up on Wednesday with the release of a weaker retail sales report. It wasn’t all bad news on Wednesday, though, as the NAHB’s index on homebuilder sentiment came in at 71 compared to expectations that the index would remain unchanged at 68.  Elsewhere in housing data, as expected Housing Starts are Building Permits pulled back.  The final release of the week, the Leading Index, came in at -0.1% MoM compared to estimates of no change. 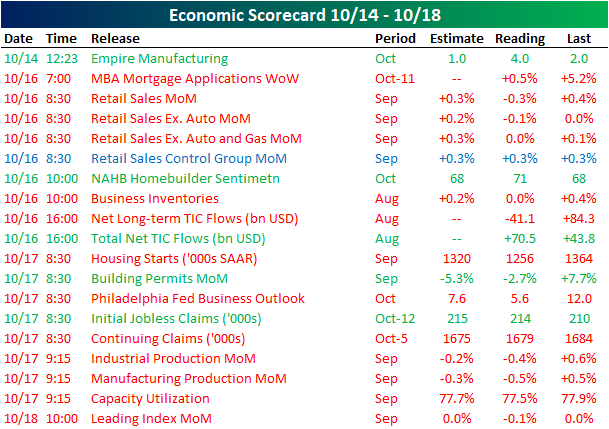 This week, earnings will likely continue to be a greater focus than economic data as the number of companies reporting continues to increase. There will only be 15 releases spread throughout the week with the Richmond Fed’s Manufacturing Index starting things tomorrow (there is nothing scheduled to release today). Other manufacturing data scheduled for this week include the Kansas City Fed’s index, durable and capital goods, and the preliminary Markit PMI.  Following last week’s housing data, existing home sales is set to be released Tuesday, FHFA Home Price indices will be out Wednesday, and New Home Sales are due Thursday.  Start a two-week free trial to Bespoke Institutional to access our interactive economic indicators monitor and much more. 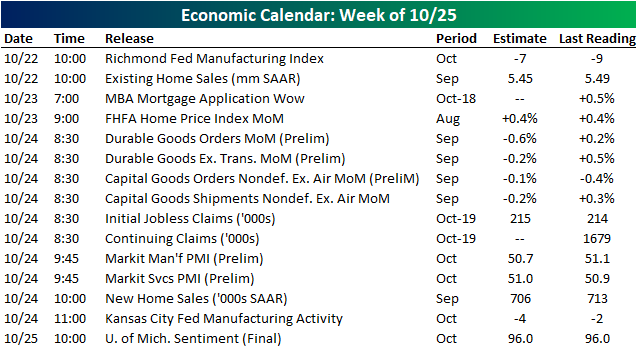