The US Now Exports More Energy Than It Imports

Yesterday the Energy Information Agency released their monthly snapshot of energy markets data for the United States.  Much of the data is somewhat lagged; the data discussed in this post is only updated through May.

Our first chart highlights the huge shift away from coal and towards natural gas as an energy source, driven by both regulation and the economics of fracking.  Also notable is the growth of wind and solar energy; solar especially is having an incredible year as production has risen an astounding 140% annualized in 2020.

The other recent shift in the domestic energy market is the COVID-driven plunge in petroleum share of total energy output.  In April, petroleum fell below one-third of total US energy consumption as driving activity plunged.  Obviously, this is very short-term and will rebound, but the growth of renewables and natural gas amidst the decline of coal will continue, unlike shorter-term trends like the highest share of nuclear power consumption on record. 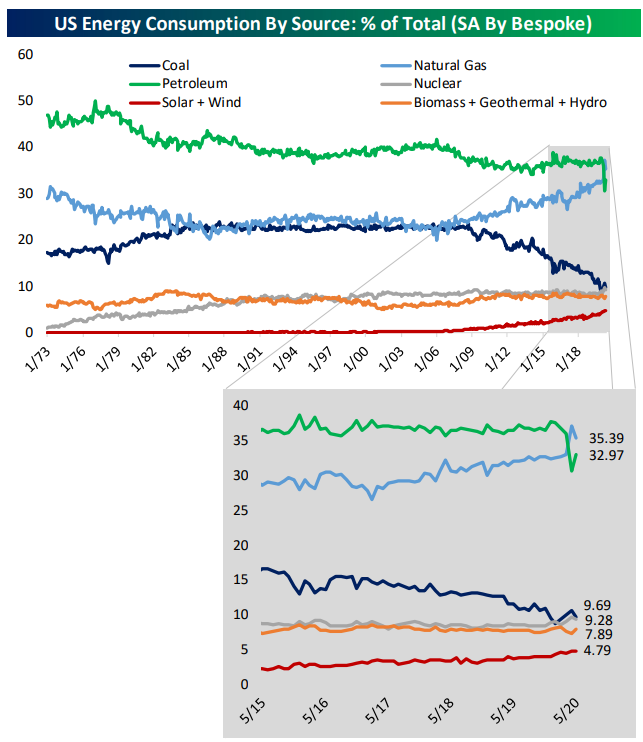 We also wanted to highlight the energy trade balance.  Historically, the US has imported vastly more energy than it has produced, but the massive expansion of domestic oil and natural gas production has reversed that precedent entirely.

As shown below, the US went from importing 2.5 trillion more BTUs of energy than it produced back in 2006 to exporting more energy than it imports beginning in August of last year.  “Energy independence” isn’t a realistic or helpful goal, because large gross trade flows can increase efficiency, but on a net basis, the US has now been energy independent for about a year.  This post was originally published in our post-market macro report — The Closer — on 9/14/20.  Click here to start a free trial to Bespoke Institutional and receive our nightly Closer for the next two weeks, featuring more commentary and data on macro markets. 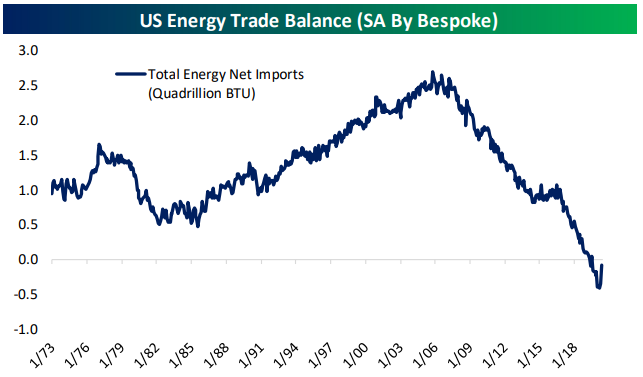