The US Is The Lone Overbought Country

While the S&P 500 (SPY) may have had a string of weakness over the past week and a half resulting in a test of its 50-DMA, SPY has held up much better than many other major economies.  Looking across the ETFs tracking the equity markets of each of the 23 major economies in or Global Macro Dashboard, the US, Switzerland (EWL), and Sweden (EWD) are the only countries that are up month to date with each country posting an over 1% gain. Conversely, China (MCHI) has been the worst performer having fallen 6.42% MTD. Additionally, alongside MCHI,  Malaysia (EWM) and Japan (EWJ) are the only countries in the red year to date.

While EWD and EWL are up a similar amount to the US MTD, the US has been the only country of the 23 to have hit a 52-week high in July.  Most of the rest of the world saw 52-week highs in the first days of June or earlier. In addition to the US being one of the only countries up on the month and recently putting in a 52-week high, the past couple of days’ rally off of the 50-DMA has resulted in the US returning back to overbought territory. By comparison, Switzerland (EWL) and Taiwan (EWT) are the only other ETFs that are even above their 50-DMA whereas 13 countries are oversold. 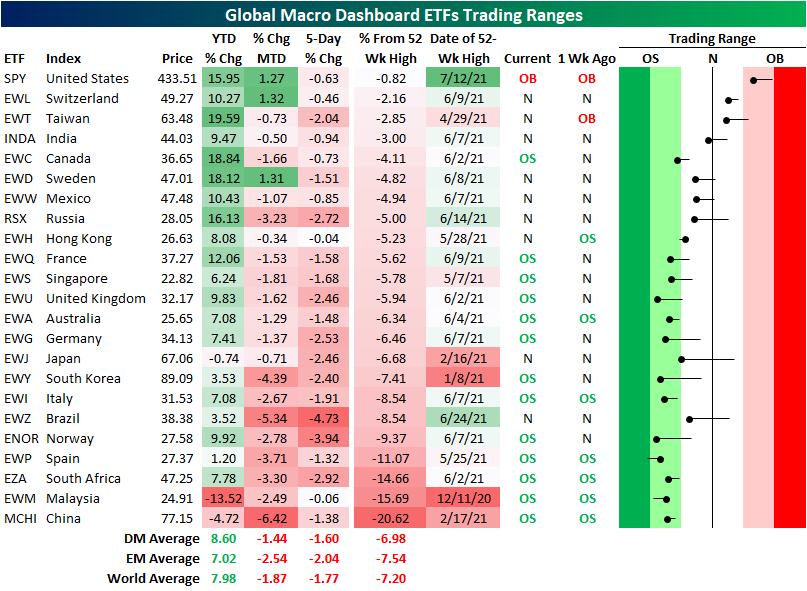 To show the outperformance of the US relative to other geographies, in the chart below, we show the ratio of the S&P 500 to the MSCI World Index that excludes the US.  Since June, the ratio has taken off surpassing the highs from last summer in the process. In fact, the ratio has risen over 6% over the past month which stands in the top 5% of all monthly moves. That is the biggest one-month uptick in the ratio since it rose 9 percentage points last April. Prior to that, July 2016 was the last time in which the US has seen as large of a degree of outperformance.   Click here to view Bespoke’s premium membership options. 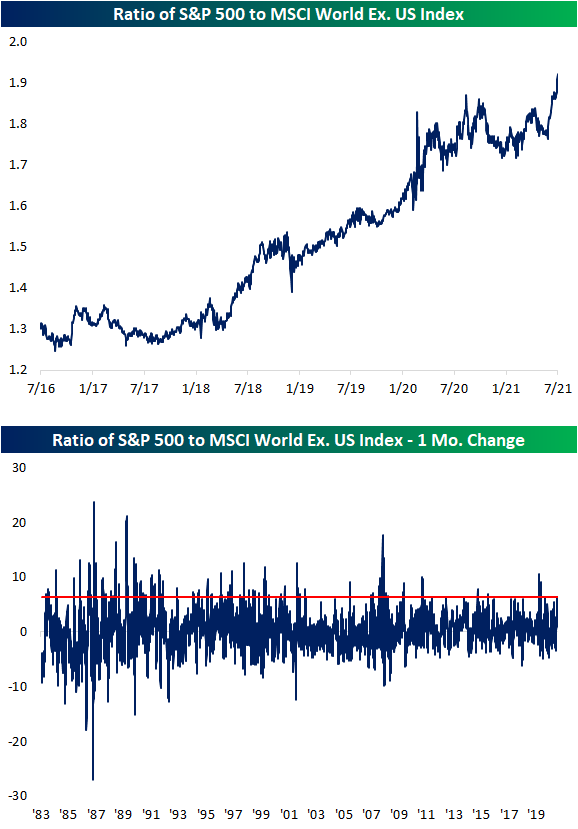