The Ups and Downs of Sentiment

In today’s Morning Lineup, we discussed the sideways range the S&P 500 has found itself in over the past eight trading days. With indecisive price action, sentiment—as measured by the AAII’s weekly survey— has been equally undecisive. After picking up substantially last week from 19.8% to 32.0%, the percentage of respondents reporting as bullish has reversed most of its gains coming in at 21.0% this week% 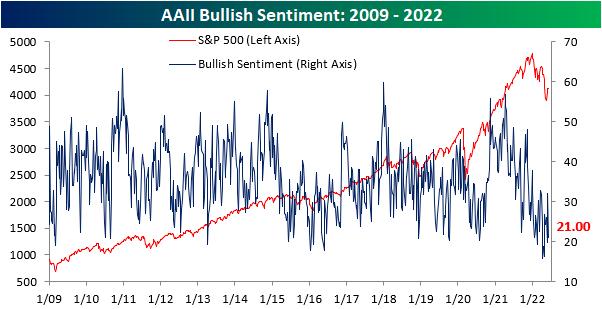 Back-to-back weeks of double-digit moves (either positive or negative for both weeks) in bullish sentiment are relatively rare with only about 4.6% of all weeks in the history of the survey dating back to 1987 seeing such a move. Of those, less than two dozen resemble this week with bulls rising by at least 10 percentage points in the first week followed by a 10 or more percentage point drop the next week for the first time in at least six months.  The most recent occurrence (of any double-digit back-to-back moves) was over a year ago in November 2020 when bulls rose by an even larger 17.9 percentage points followed by an 11.5 point drop.  We would also note that the current situation has the second-lowest reading in bullish sentiment of these past instances behind May 1988—roughly one year after the survey began—when it was two percentage points lower.

As we have frequently noted in the past, low bullish sentiment has actually tended to be a positive signal for forward performance of equities. Although that could pose an optimistic sign for the S&P 500 going forward, big swings up then down then have not tended to be the best sign for equities.   As shown below, after similar moves in bullish sentiment, performance for the S&P 500 one week and month later has been positive only half the time with an average decline of 0.11% and 0.95%, respectively.  While performance is more often than not positive three months later, the S&P 500 has averaged an 8 bps decline versus the norm of an average gain of 2.9%. Six and twelve-month performance is similarly more consistently positive but does not outperform the norm. 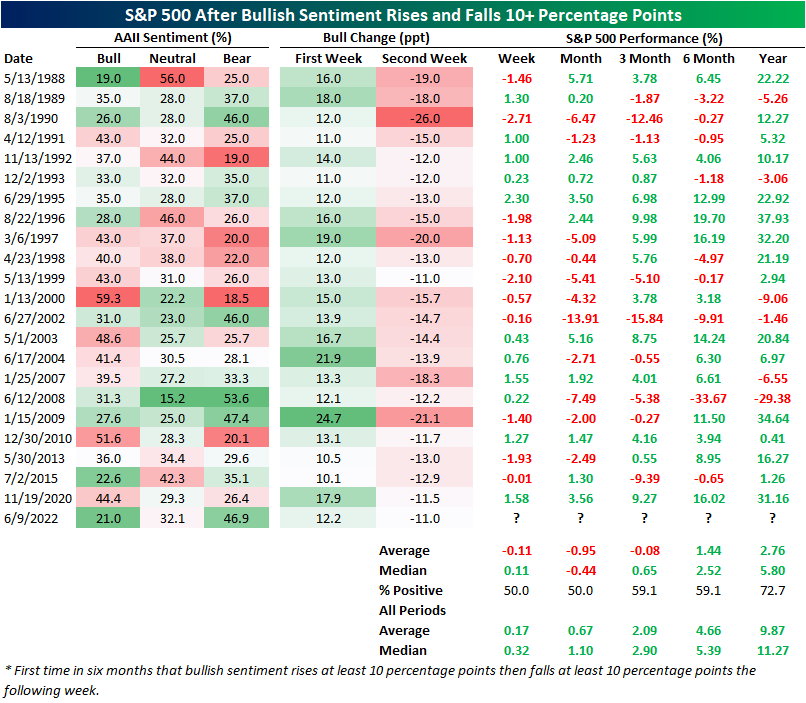 As bulls stepped back this week, bears recouped nearly 10 percentage points rising from 37.1% to 46.9%.  While that is still below the readings above 50% observed throughout April and May, historically that is an elevated reading well above the historical average of 30.7%. 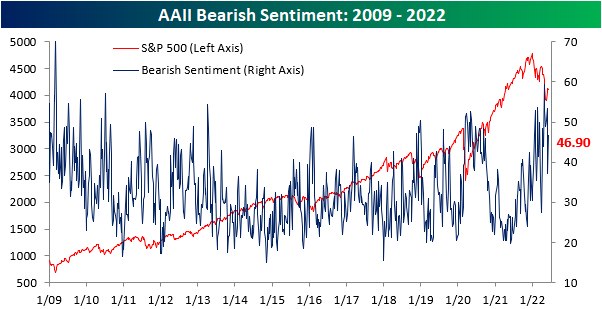 Given this, the bull-bear spread moved deeper into negative territory meaning bears continue to heavily outweigh bulls.  Bears currently outnumber bulls by 25.9 percentage points. Again, that is a very low level albeit not as extreme as only a couple of weeks ago. Click here to learn more about Bespoke’s premium stock market research service. 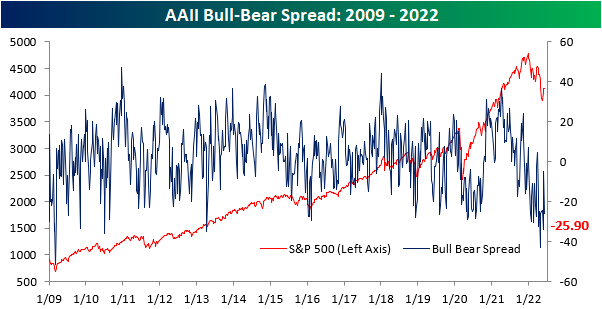