The Unluckiest Index Ever?

The STOXX 600 is a European index comprised of equities from 17 countries that span the market cap spectrum of large, mid, and small-cap stocks.  Since its introduction in 1998, the index was meant to act as a gauge of the overall performance of stocks in the European region.  Judging by the performance of the STOXX 600 over time, it hasn’t been a good 20+ years to be invested in Europe.

For starters, let’s look at the relative strength of the index versus the S&P 500. During the STOXX 600’s first decade in existence, it slightly underperformed the S&P 500, but throughout that decade there were periods where Europe outperformed the US and vice versa.  Since the end of the Financial Crisis, though, it has been a one-way trip lower.  How bad has it been for Europe relative to the US?  Since the start of 1998, while the STOXX has rallied just under 54%, the S&P 500 is up by nearly 250%! 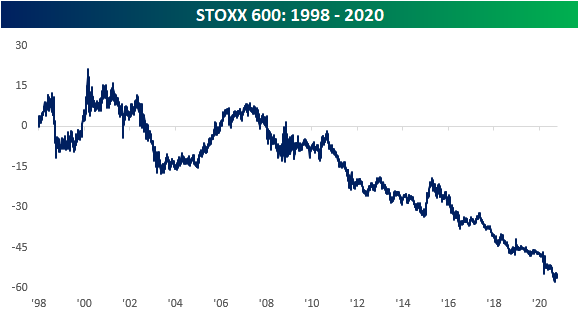 In addition to underperforming the S&P 500, the STOXX 600 has been stuck in an incredible range for most of its existence.  In its first two years, the STOXX 600 saw positive returns, rallying up to 400 in early March 2000.  When the dot-com bubble burst, though, European equities weren’t spared as the index lost more than half of its value.  Beginning in March 2003, the STOXX started to recover and was back near its prior highs in June 2007.  Like the rally in 2000, the good times didn’t last for long, as the STOXX 600 once again hit the wall at the same 400 level.  What followed this time around was also similar to what happened from 2000 to early 2003 and European equities once again lost over half of their value.  Over the next six-years, the STOXX 600 once again recouped all of its losses and traded at a record high of just over 400.

Sadly, the third time was not the charm in 2015, and once again, the STOXX 600 pulled back from record highs above 400.  This time around the decline wasn’t as severe, and in 2018, the STOXX 600 was briefly back around the 400 level, although it couldn’t convincingly breakout…until late 2019.  Beginning in November 2019, the STOXX once again topped the 400 level, a level it first traded above nearly 20 years earlier, and from there it kept climbing.  On February 19th, the STOXX 600 closed at a record high of 433.9, solidifying what appeared to be a major long-term breakout for stocks in the European region.  The sun was shining on Europe again!

But then COVID hit.  Just one week after hitting a record high in February, the STOXX 600 was back below 400 and on its way to a decline of 38%.  Like most other equity markets around the world, the STOXX 600 has recovered from its COVID lows, but not to nearly the degree as many other areas of the world.  Even with the rebound, the STOXX 600 is now underperforming the US more than ever, and as of today it still remains more than 16% below its high from February and nearly 10% below the long-term resistance level of 400. Can someone please give the STOXX 600 a rabbit’s foot?  Click here to view Bespoke’s premium membership options for our best research available. 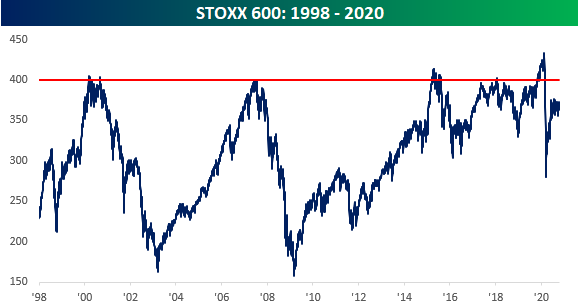