What started out as a weak open for equities today started to show improvement early on.  Just an hour after the open the S&P 500 was even up for a few minutes, but then the President sent out a tweet where he argued that “dealing with China is a very expensive thing to do.”  He then went on to say that “100 Trade Deals wouldn’t make up the difference” for the “Plague from China.” The timing of this tweet was especially concerning as it comes just two days before the expiration of a 90-day enforcement provision of the trade deal on Friday. With that tweet, the equity market’s rally was stopped dead in its tracks as the S&P 500 sold-off for the rest of the morning.

By noon, the market was attempting to bounce, but then David Tepper came on CNBC to say that the current market was one of the most overvalued he has ever seen.  That stopped any chance of a rebound and within minutes, the S&P 500 was at its lows of the day.  Ever since then, the market has been trading sideways all afternoon, but with 45 minutes left in the trading day, we’ll see if those lunchtime lows can hold.  Between Druckenmiller after the close yesterday, Trump this morning, and then Tepper at lunch, you can’t fault the market for acting a little punch drunk.  Start a two-week free trial to Bespoke Institutional for full access to our research and interactive tools. 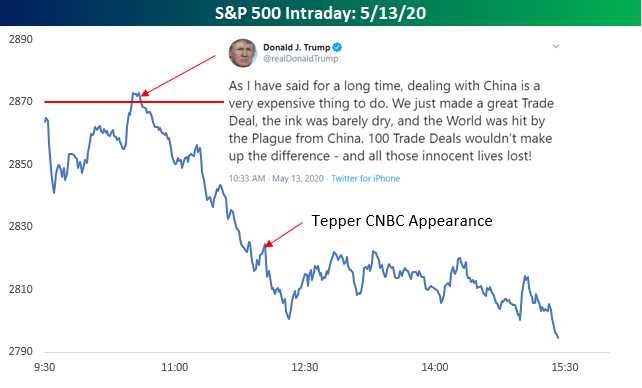