The Streak is Over

After falling every day since June 14th, the average price of a gallon of gasoline in the United States, according to AAA, rose yesterday.  That ends what was the second-longest streak of consecutive declines going back to at least 2005. Had the streak lasted another three weeks, it would have gone down as the longest on record, exceeding the 117 days from back in 2015, but it’s ironic that this streak began back in mid-June when the Federal Reserve started to panic about inflation and leaked plans to hike rates by 75 bps at its June meeting to the WSJ and is now ending on a day when the Fed is expected to hike rates by at least 75 bps for an unprecedented third straight meeting. 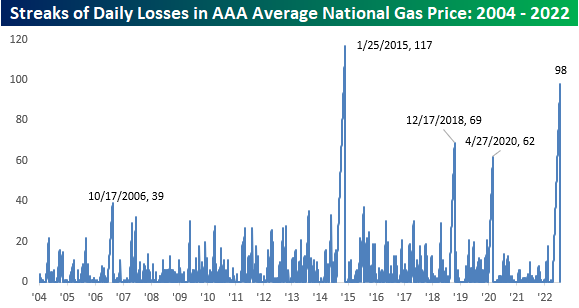 While the streak is over, it still doesn’t diminish the fact that prices at the pump have been in freefall since that peak in June, falling by 27%.  Prices at the pump are down close to 4% in September alone.  While the national average price has only been higher at this time of year two other times (2008 and 2012), the 3.9% decline this month is larger than average.  Even more surprising is the fact that with prices at the pump up 12% YTD, they are actually up less YTD than average for this time of year.  There’s no dismissing that inflation continues to be a major problem, but most people probably wouldn’t believe that gas prices are up less this year through 9/20 than they are in the average year.  Click here to learn more about Bespoke’s premium stock market research service. 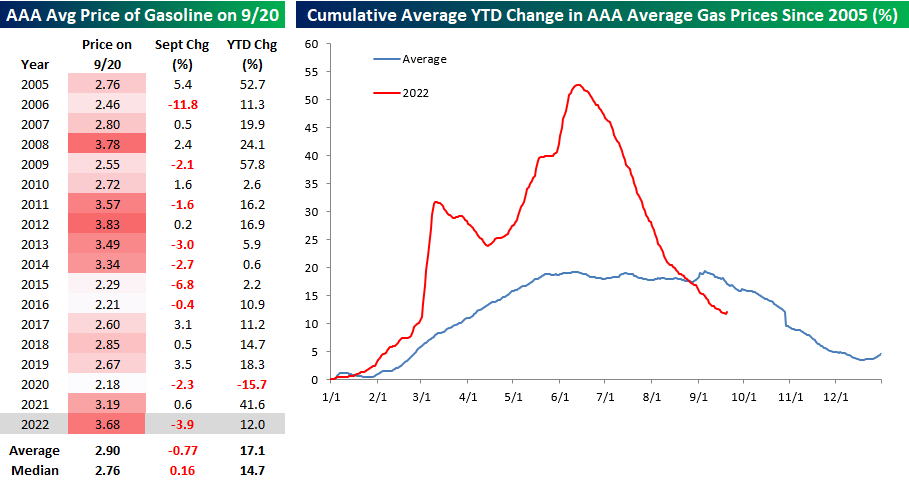