The State of the Union

Tonight, President Biden will present to Congress and the nation his first official State of the Union address (SOTU). In terms of timing, this will be the latest into a new year that a SOTU has been held in at least 50 years.  Therefore, when looking at market performance leading up to and after the address, we’ll be dealing with different than normal seasonal factors for this SOTU. Still, the S&P 500’s performance in the month leading up to the current SOTU address ranks as the fourth worst since 1945, outperforming only 2016, 2008, and 1982. Whereas the average performance in the month prior to the SOTU is a gain of 2.2%, this year, the S&P 500 is down by about 6.6% in the month leading up to Biden’s first SOTU address (chart below). 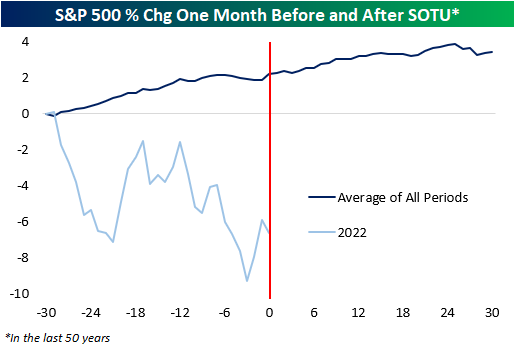 In the last 50 years, there have only been four other years where the S&P 500 traded down 5%+ in the month leading up to a SOTU address. In those four other years, the S&P 500’s performance in the month after the SOTU was a loss of 1.5%, but the median was a gain of 0.7%, indicating that results varied widely.  For perspective, the average one-month return for all periods in the last 50 years is a gain of 1.1% (median: 1.8%). Regarding treasuries, in the four years where the S&P 500 was down 5%+ leading up to the SOTU, the 10-year yield’s performance was all over the map both before and after the address.

Below is a table that summarizes the performance of the S&P 500 and the 10-year yield in the month before and after the SOTU address. For the S&P 500, performance in the week after the SOTU has generally been positive, but one major exception was 2020 when the S&P 500 declined more than 27% as COVID crashed the markets and economy.  Regarding the 10-year, it’s performance is relatively trendless, although its yield tends to rise modestly the day after the address as investors ponder how all the ‘goodies’ that the President mentions in the speech will be paid for. 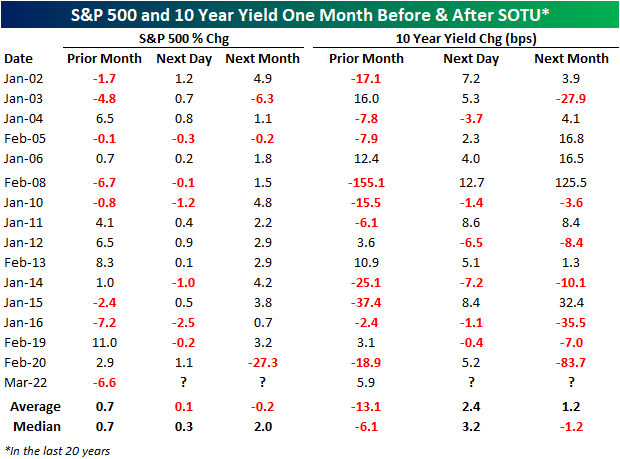 Although the past month’s performance has been weak relative to the other periods, there is little correlation between performance the month before and after the SOTU address. Although there is a slight positive relationship, only 3% of the variance in the y-variable is explained by movements in the x-variable. Essentially, this is not a tradeable event. 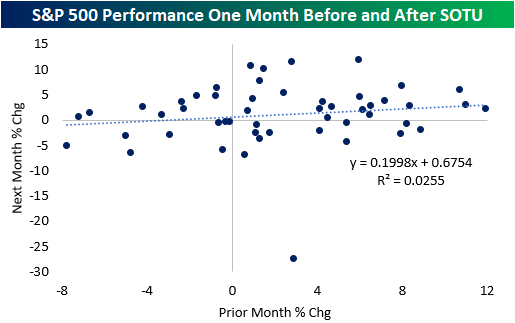 Ukraine and the pandemic will likely be the main focusses of tonight’s address, and investors will eye the President’s comments about each situation for a read on the President’s view on each situation. Positive comments about these situations may not necessarily be positive for the market, as easing in these areas would imply an increased probability of more aggressive Fed rate hikes. In any event, though, investors should not be making trading decisions based on previous market movements leading up to and after the SOTU, as every year bears unique political circumstances. Click here to view Bespoke’s premium membership options.