There was a time not long ago when companies that traded at more than 20 times earnings were considered expensive.  For investors in the software sector, valuing a stock based on its earnings multiple is considered a metric of a bygone era right up there with ticker-tape and trading floors.  With most companies in the sector having no earnings to speak of, the more preferable way to value a company is to look at its multiple to revenues, but even by that metric, a number of companies trade at more than 20 times revenues.

The table below lists companies in the Russell 3000 Software industry that trade for more than 20 times annual sales.  Of these 27 names, eight trade for more than forty times sales, and two – BigCommerce (BIGC) and Zoom Video (ZM) – trade at more than 100 times sales.  With valuations like that, it’s hard to imagine what assumptions are being made about future growth.  It’s not as though these companies are small either.  Of the 27 stocks listed, more than two-thirds have market caps of more than $10 billion, and their combined market cap is over $750 billion.  Regarding their valuations, you can say all you want, but investors have gotten rich owning them this year as their average YTD performance is a gain of 159.1%.  The median is not as strong but is still an impressive 113.6%. 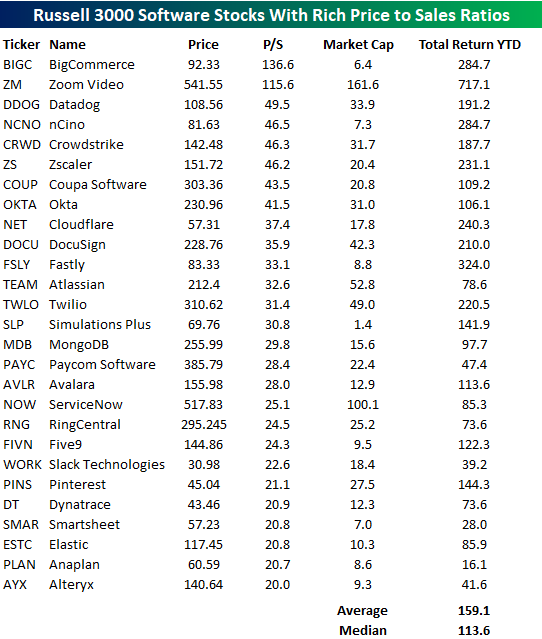 With a group of highflyers like this, you would think that this would be a good group to watch in terms of gauging the risk appetite of the broader market.  To that end, the chart below compares an equally-weighted basket of the 27 stocks listed above to the S&P 500 over the last year.  What’s interesting to note about their performance is that leading up to prior peaks in the last twelve months, the group peaked at the same time as the S&P 500.  While the pricey software stocks provided no ‘advance warning’ of a market decline, following declines, it was helpful to watch.  As shown by the three gray circles in the chart, during each of the notable market declines of the last year, investors started to rotate back into the group before the market made its ultimate low. Based on the last year, when these stocks start to take off, the rest of the market has followed suit.Start a two-week free trial to Bespoke Institutional to use our extremely useful Earnings Explorer tool today! 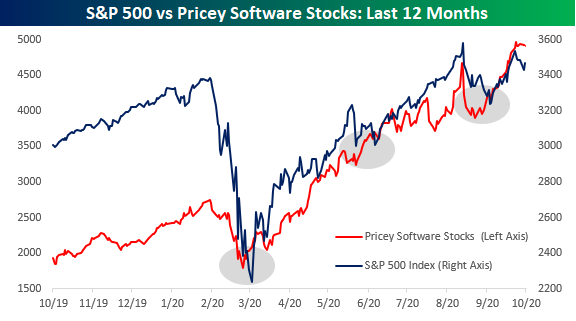