The Smaller The Better

While lately it seems as though all anyone is talking about is the concentration of market cap in the largest stocks in the S&P 500, you may be surprised to hear that small caps have actually been leading the charge higher from the market lows. It’s been neck and neck, but while the S&P 500 is up just over 31% from its intraday March low, the Russell 2000 is up over 32%. 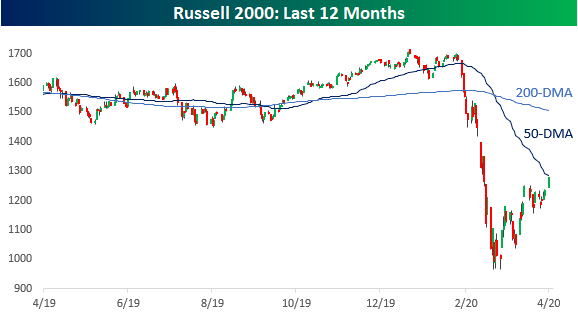 Granted, the Russell 2000 is only outperforming the S&P 500 by a slim margin, but it’s micro-cap stocks that have stolen the show.  Since its low in March, the Russell Micro Cap Index is up 36% and actually back above its 50-day moving average for the first time since late February.  The index is still down much more from its highs than either the Russell 2000 or the S&P 500 and the index’s entire market cap is only $365 billion (less than the market cap of Walmart WMT), but from the lows at least, micro-cap stocks have been on fire. 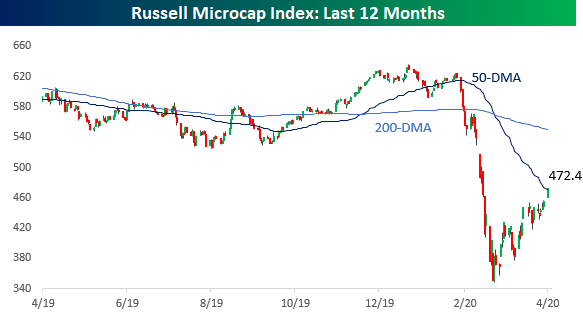 The last four days have been especially strong for the smallest of the small stocks as the Russell Micro Cap index has risen at least 1% on each of the last four trading days, including a 3.8% gain today.  The Russell Micro Cap Index has only been around since 2006, but during that time there have only been two other periods where the index saw four straight days of 1%+ gains.  The first was in late October 2008 while the second was in August 2009. Back in October 2008, if you chased micro-cap stocks after their four-day rally, the next few months were pretty painful, but the occurrence in August 2009 came in the early stages of the bull market. Receive full access to our research and commentary with a free two-week trial to Bespoke Premium. 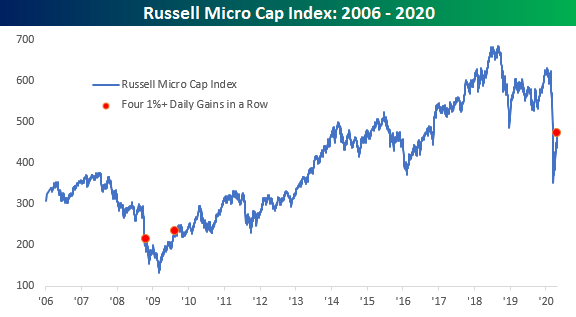