Any publicity is good publicity, right? When it comes to the world’s largest podcast and the company that hosts it, that seems to be holding true at least for today.  As of this writing, Spotify (SPOT) is trading up double-digits versus Friday’s 52-week low for its fifth-best day on record since its IPO as the company has been in a whirlwind of headlines over the past week. Those headlines concern comedian Joe Rogan’s Spotify exclusive podcast, The Joe Rogan Experience, and the controversy it has caused due to artists like Neil Young pulling their music from the platform citing COVID misinformation on Rogan’s podcast.  While there have been a slew of headlines in the past few days coinciding with huge moves in SPOT’s stock, it is not the first time this has happened.

In the chart below, we show Bloomberg and other major news agency headlines concerning Joe Rogan, his show, and Spotify over the past two years. Since Spotify and Joe Rogan first struck a deal to have the podcast exclusively on the platform in May 2020, headlines surrounding the show have at multiple points resulted in huge swings in the stock. When news of the deal first hit the tape, the stock soared and then soared again even more substantially roughly a month later as analysts upgraded the stock in response to the deal. In fact, that response to upgrades resulted in the stock’s third-best single-day gain on record. From May 2020 before the deal was announced to the highs later that summer in July, SPOT would rise from around $150 to a little under $300.  After a few months of consolidation, including a sharp but short-term drop when Spotify staff gave pushback on Alex Jones’ appearance on Rogan’s show, the stock surged again on strong earnings partially accredited to the addition of the podcast. SPOT then erased much of those gains in early 2021, and more backlash over COVID “misinformation” again sent the stock lower last spring.  While the last earnings report in the fall saw the stock spike higher, it quickly reversed lower and the recent onslaught of headlines resulted in a 52-week low on Thursday, leaving SPOT at similar levels to when the Joe Rogan deal first went through. 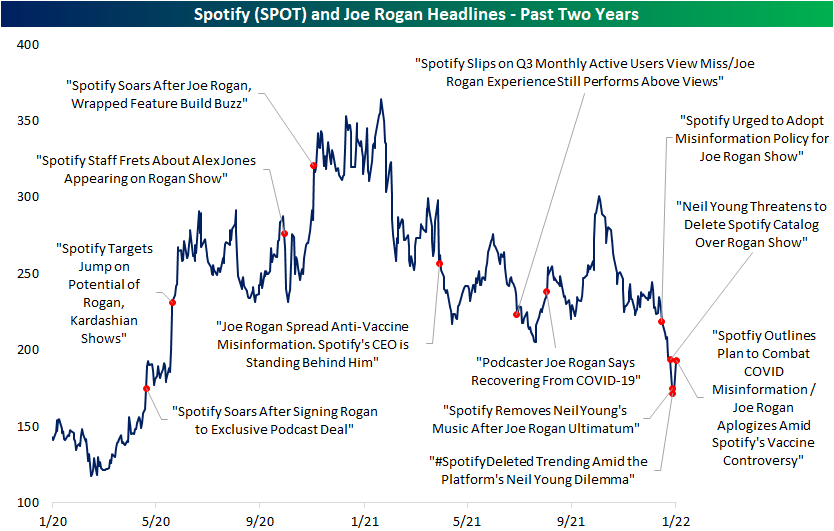 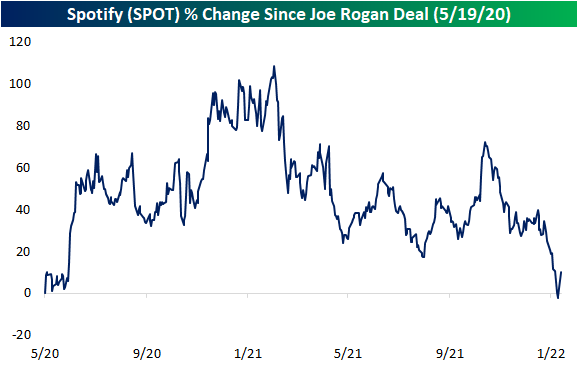 While there is some overlap with earnings, as previously mentioned, days in which Spotify and Joe Rogan find themselves in the news have coincided with some of the stock’s largest single-day moves or highest volumes.  In fact, today is on pace to be the third-best day since the deal with Joe Rogan went through and volumes in the past several days have sat around the 90th percentile of all days since the stock’s IPO. 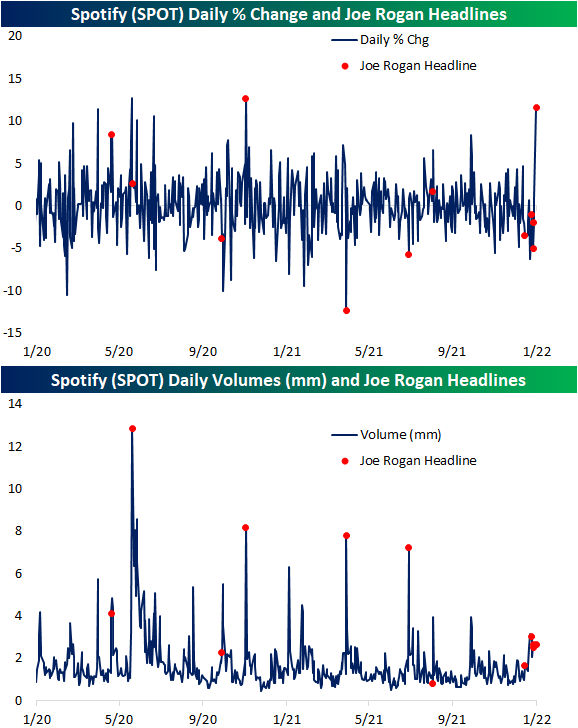 The most recent string of headlines have hit the tape with only a few days left before the company reports Q4 results.  Using data from our Earnings Explorer tool, SPOT has historically traded weak in response to earnings. Since its IPO in 2018, there have only been four quarters in which the stock had a positive one-day reaction to its earnings report. One of those was last quarter when the stock rose 8.3%.  When it comes to Q4 specifically, the stock has yet to react positively to earnings and the stock’s average decline has been the weakest of any quarter averaging a decline of 5.21%. Click here to view Bespoke’s premium membership options. 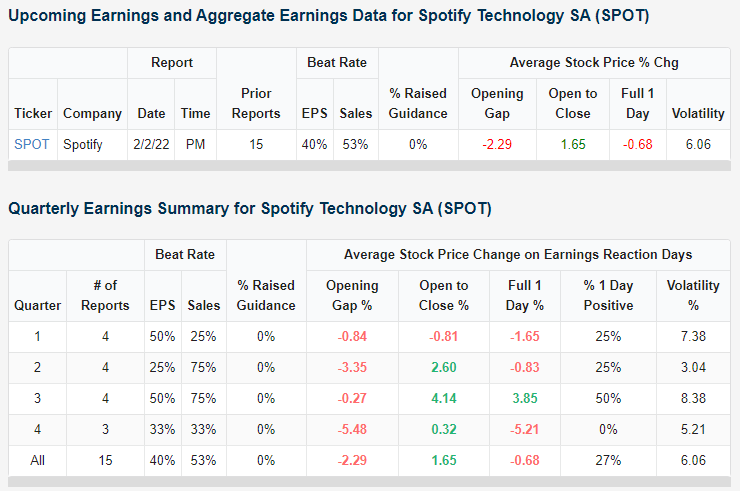