As of yesterday’s close, the Nasdaq declined more than 10% in the span of just three trading days. Selling pressure has been consistent as well as the Nasdaq notched declines of more than 1% on each of the three trading days.  The last time the Nasdaq dropped 10%+ in the three days span with all three days experiencing drops of at least 1% was back in September 2020.  Since the Nasdaq Composite started in 1971, there have only been eighteen other occurrences, and nine of those occurred during the bursting of the dot-com bubble. 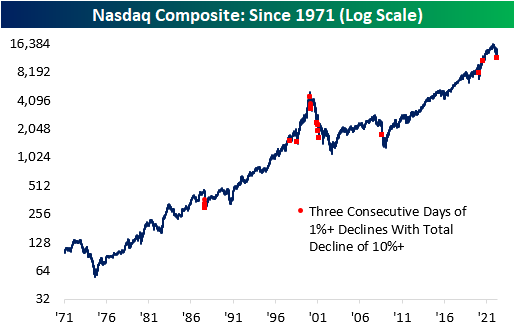 Performance following these prior occurrences has not been very consistent.  In the table below, we list each of the 9 occurrences in the chart below that took place without another occurrence in the prior month.  One day and one week later, the Nasdaq’s median gain is better than the average and median returns for all periods since 1971.  Moving further out though, median performance over the following one and three months has been weaker and less consistent to the upside than the average returns for all one and three-month periods.  As has been the case with a lot of analyses lately, while short-term returns have been mixed, the one constant has been volatility.  Click here to view Bespoke’s premium membership options. 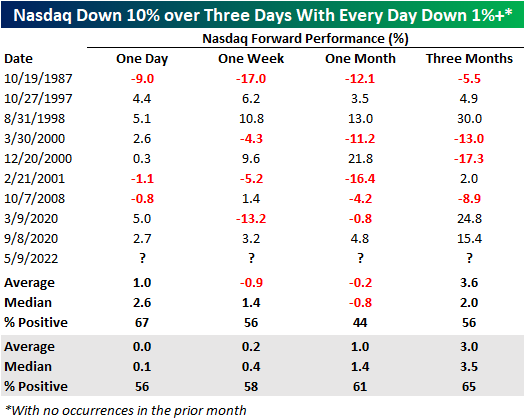