The Largest Stocks Weigh Heavy on the S&P 500

There has been plenty of chatter recently concerning the impact of the largest stocks in the S&P 500 on the broader index.  As shown in the chart below, 2020 began with the market caps of Apple (AAPL), Microsoft (MSFT), Alphabet (GOOGL), Amazon (AMZN), and Facebook (FB) totaling 17.3% of the S&P 500’s total market cap.  Since at least 1990, that is the largest percentage of total market cap that has been taken up by the top five stocks at the start of the year. The only other year with the top five stocks holding a comparably high weighting is 2000 when it was 17%.  That year the five stocks that held the highest share of total S&P 500 market cap were Microsoft (MSFT), General Electric (GE), Cisco (CSCO), Walmart (WMT), and Intel (INTC).  While MSFT is the only one to have stayed on this list for all but one year (2001) since then, GE currently has fallen to the 66th largest stock in the index, CSCO the 27th, WMT is the 10th largest, and INTC is the 18th largest.  Start a two-week free trial to Bespoke Institutional to access our full library of research and interactive tools. 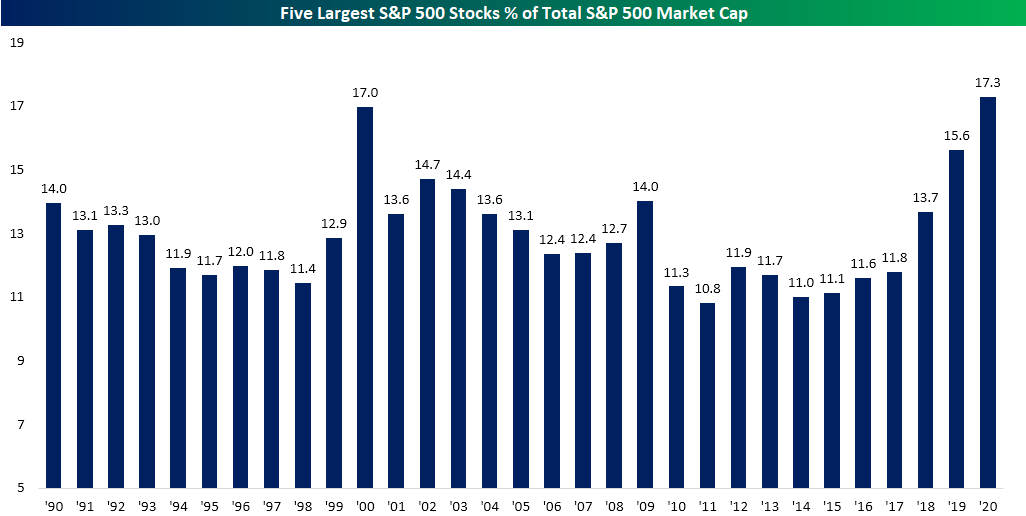