The Few, the Lowly, the Laggards

With less than two months left to go in 2019, the S&P 500 is sitting on a gain of nearly 23% YTD, and all but two of the index’s 24 industry groups are up by at least double-digit percentages.  The two laggards are Energy (+4.5%) and Drugs and Biotechs (+5.5%), while the three strongest groups are all from the Technology sector (Tech Hardware: +44.8%, Semis: +37.7%, and Software: +32.8%).  Surprisingly enough, Banks are even starting to move up the performance list as that group is up just a hair under 30% on the year putting it in fifth place on a YTD basis.

The table below lists where each of the S&P 500’s Industry Groups is currently trading with respect to its 50-DMA.  While you would expect just about everything to be extended after the recent leg higher, that’s not the case.  The S&P 500 as a whole is just 3% above its 50-DMA, and just five groups are more than 5% above their 50-DMAs.  The two most extended groups are Tech Hardware (think Apple) and Banks.  On the downside, there are actually as many Industry Groups trading below their 50-DMAs as there are groups trading more than 5% above their 50-DMAs.  As shown at the bottom of the table, Consumer Services, Real Estate, Household & Personal Products, Commercial Services, and Utilities are all currently below their 50-DMAs.  These aren’t groups that have been lagging the market all year.  In fact, three of them are outperforming the S&P 500 on a year to date basis, but in the majority of cases, these are defensive-oriented groups that have fallen out of favor as the market’s sentiment has shifted and rates have risen. Sign up for Bespoke’s “2020” special and get our upcoming Bespoke Report 2020 Market Outlook and Investor Toolkit. 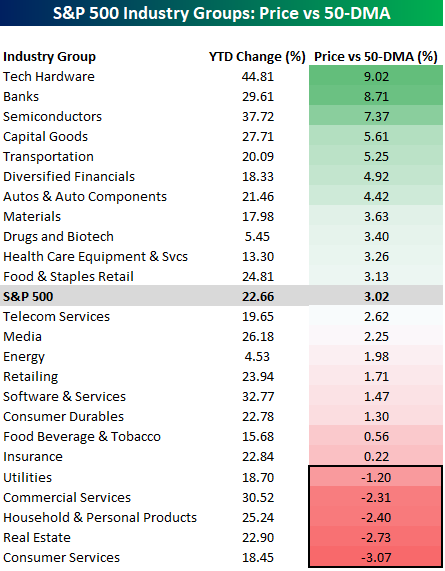