At the end of August 2020, the price-weighted Dow Jones Industrial Average changed up 10% of its index members by replacing Pfizer (PFE), Raytheon (RTX), and Exxon Mobil (XOM) with Amgen (AMGN), salesforce.com (CRM), and Honeywell (HON).  Below are one-year price charts of the three stocks added to the Dow.  AMGN has bounced back a bit over the last six months, but it’s roughly flat YoY.  CRM was up significantly at its highs last November, but it’s currently in a 36% drawdown now.  Finally, HON has been in a downtrend since last summer.

The three stocks removed from the Dow in August 2020 look completely different from the three stocks that were added.  All three are in uptrends at a time when the broad market is in correction mode and trending lower.

Stocks usually get removed from indices because of poor performance and/or shifting economic trends.  Conversely, stocks that get added to indices have usually performed well leading up to inclusion.

It has been 386 trading days since the last Dow changes were made at the end of August 2020.  Below we show how the stocks added and removed performed in the 386 trading days leading up to the index change.  CRM, AMGN, HON — gained 38% leading up to inclusion in the Dow, with a big final jump between the time the changes were announced and when they went into effect.  RTX, PFE, XOM — the three stocks removed – were down an average of 25.7% over the same time frame. 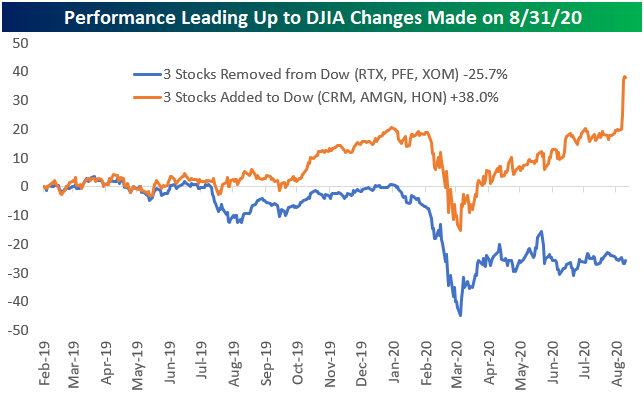 Below we show how the three Dow additions and removals have performed since the index changes occurred on 8/31/20.  The three stocks added to the Dow have acted as a drag on the index with an average decline of 9.5% since inclusion.  On the other hand, the three stocks removed from the Dow have gone bonkers, gaining 68.1%.  Click here to try out Bespoke’s premium research product.  Be sure to also check out Bespoke Crypto as well. 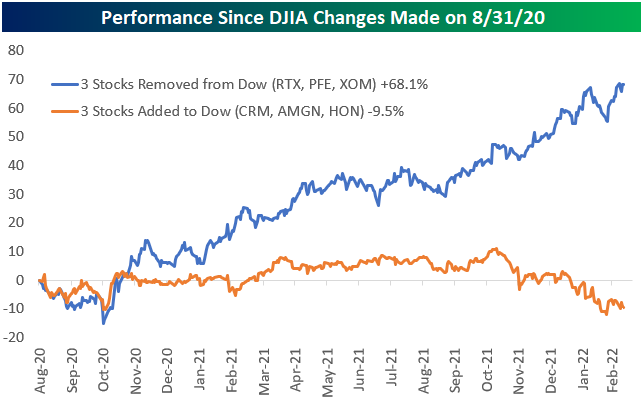