The Definancialization of US Equities

The huge underperformance for banks so far this year has helped the S&P 500 Financials sector see its share of weighting in that broad index continue to collapse. From just shy of one-quarter of market cap in the mid-2000s to the mid-teens share most of the past decade, the S&P is now to a large extent “definancialized” as the share of its market cap accounted for by financial sector stocks is about as low as it has gotten in the past forty five years. Longer-term, there’s precedent for further declines, though. As shown in the chart below, Financials were less than 5% of the index back in the 1940s. While we aren’t predicting a return to that level, it can’t be outside the range of possibility given the collapse in Financials’ share over the past few years.  We’ve already seen the Energy sector’s weighting fall from 15% or so in the mid-2000s down to <3% as well.  We discussed this chart and other retail enthusiasm indicators in last night’s Closer report, which is available to Bespoke Institutional members.  Click here to start a two-week free trial. 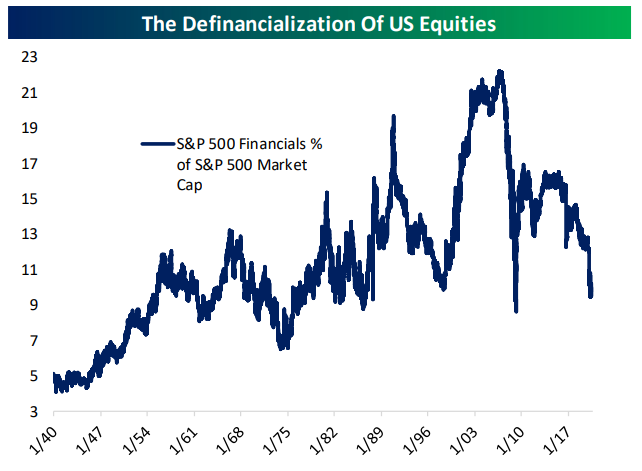