The COVID Trade Is Back

Each of the major indices are down well over 1% with the Dow and small-cap Russell 2,000 down even more having fallen over 2% as of this writing.  Meanwhile, Treasury yields are falling and at multi-month lows.  The main reason being attributed to the risk-off move today is jitters over the rising prevalence of the Delta variant.  To give some evidence to this being the catalyst, in the chart below we show the relationship between individual S&P 500 stocks’ performance today and back during the COVID crash from February 19th to March 23rd of last year.  As shown, there is a general correlation that exists between the performance of the two periods.  Some of the best performers today were also some of the best performers during the crash and vice versa. For example, Consumer Staples was the sector that held up the best during the COVID Crash last year with the average stock in the sector falling 24.04% versus an average decline of 38.7% for the entirety of the S&P 500. Today, several of the sector’s names are the top performers on the day as the average stock in the sector is only down 19 bps versus an average decline of nearly 2% for all S&P 500 stocks.  Click here to view Bespoke’s premium membership options. 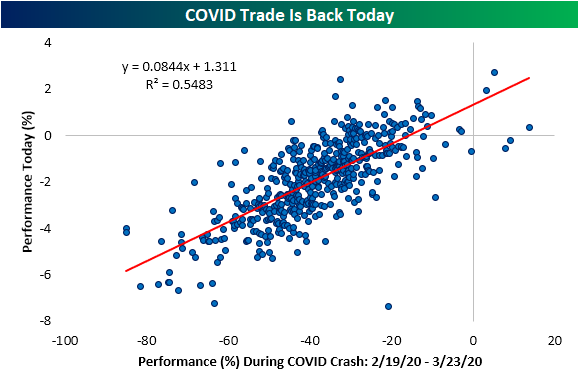