“The Captain Has Turned on the Fasten Seat Belt Sign”

Since most of us haven’t been on planes in quite a while, it’s been some time since we last heard the above statement warning of turbulence ahead.  If only we had one for the market.  While there’s still another week left in the month, this September is on pace to be one of the most volatile in terms of the frequency of 1% daily moves (up or down) for the Nasdaq Composite.  The table below on the left shows the daily percentage moves of the Nasdaq so far in September.  Of the 17 trading days so far including today, all but three have seen one-day moves of at least 1%, and on one of those three days (9/2), the daily move was 0.98% or just shy of 1%.  We would note that the Nasdaq has been fluctuating multiple times today between a move of above or below 1%, so depending on where things settle today, the percentage of 1% days this month will be either 82.4% or 76.5%.

If today’s move settles at 1% or more, this month will be on pace to rank as number eight in terms of the highest frequency of 1% daily moves (table on left).  It is also on pace to be just the 24th month since 1970 where the Nasdaq moved 1% or more on at least three-quarters of all trading days.  Looking through the table, the majority of other months were from the late 1990s through 2002, but there were also a handful of occurrences during the financial crisis and earlier this year.

The chart below of the Nasdaq since 1995 includes red dots indicating each month where the Nasdaq moved 1%+ on at least 75% of all trading days.  During the run-up and crash from the dot-com boom, there were occurrences on both sides of the peak, but the vast majority of them came after the peak and then occurred periodically right up through the low in October 2002.  During the Financial Crisis, there were four straight months of occurrences spanning October 2008 through January 2009.  More recently, March of this year saw the fifth-highest percentage of 1% days at 86.4%, and then in April, just over 76% of all trading days saw 1% moves.  With a number of indicators and trends in the market lately, the two periods that keep popping up are the late 1990s to early 2000s and the Financial Crisis, and in the case of a high frequency of 1% daily moves, the same can be said.  Keep those air sickness bags handy! Click here to view Bespoke’s premium membership options for our best research available. 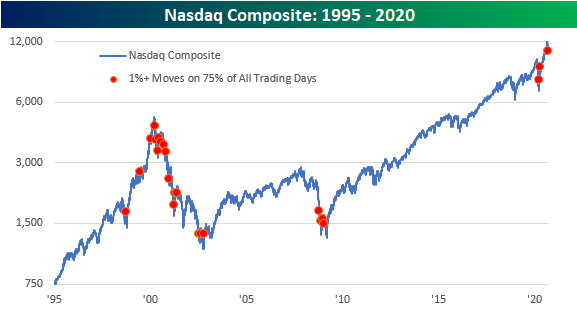