In the currency space, the US dollar has certainly not been immune from recent market volatility.  The dollar index peaked on February 20th, just one day after the S&P 500 had reached its all time highs.  That was the dollar’s highest level since April of 2017.  Over the following days, the dollar would go on to fall roughly 5% to its low on March 9th.  In the time since then, it has more than recovered those losses, rising over 6% and is once again back up to its highest levels since 2017. 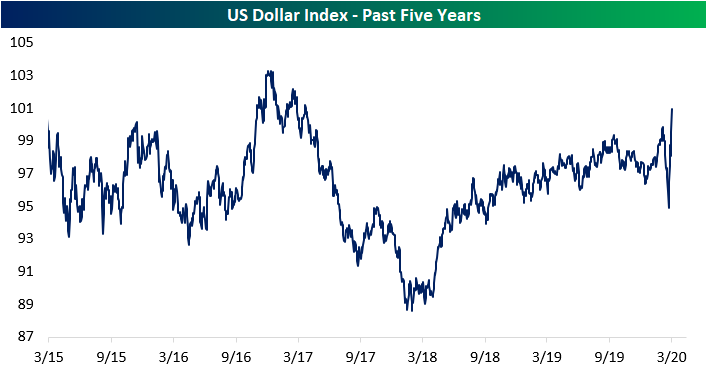 This string of volatility for the greenback is rare.  As of today, the dollar is up 4.26% over the past ten days. But just back on the ninth (the recent low) it had been lower by 4.12% over the prior ten days.  The last time that there was both a 10-day change up and down of at least 4% in the span of just ten days was back in October of 2008. Going back through the index’s history since the early 1970s, there have been a total of 15 days (including that 2008 and current instances) in which such swings can be observed; shown by the red dots in the chart below. Prior to 2008, the only other times the dollar was as volatile by this measure was in the 1980s and late 1970s. So with regards to more recent history, it is even more unprecedented. 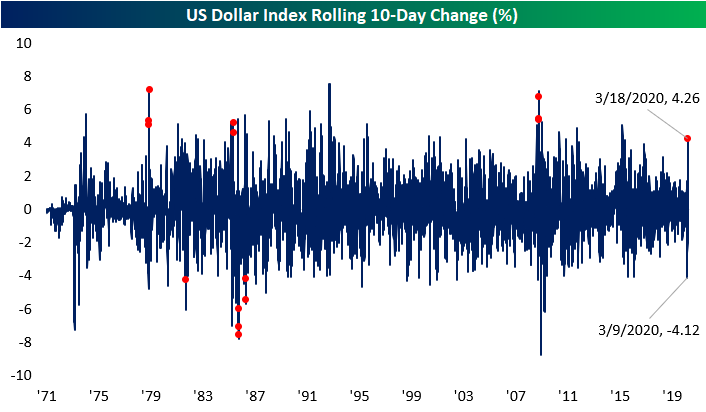 In terms of daily changes, the dollar has also been very volatile. Over the past ten days, the currency has averaged a daily change (positive or negative) of just over 1% which is rare going back through history. Again this is the most volatile the dollar has been since the financial crisis, though at that time, the daily swings were larger on average; reaching 1.35% at the high. Prior to 2008, the only other times the average daily change was over 1% was in the early 1990s, mid-1980s, and late 1970s. As with 2008, those past times were slightly more volatile than the current moment.  Start a two-week free trial to Bespoke Institutional to access all of our interactive tools and research. 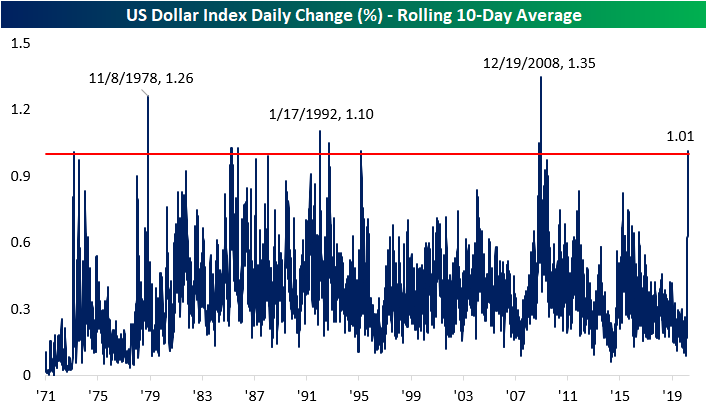