The Best and Worst of Q4 Earnings

Earnings season begins this week as corporations report their Q4 results and wrap up fiscal year 2021. Earnings season unofficially begins when the large banks begin reporting their earnings and concludes when Walmart (WMT) releases its results.

We do a lot of earnings season analysis using our Earnings Explorer tool, which is available to Bespoke Institutional subscribers.  One type of analysis is tracking how share prices typically react to earnings reports.  Since the start of 2011, there have been certain companies that have excelled after reporting Q4 results specifically, while others have historically struggled. Of the companies that have at least five years worth of Q4 reports, Netflix (NFLX), Etsy (ETSY), and SolarEdge (SEDG) have been the S&P 500’s three top performers, averaging 12.4%, 9.6%, and 8.3% gains on their Q4 earnings reaction days, respectively. Charles River Laboratories (CRL), Darden Restaurants (DRI), Signature Bank (SBNY), and Lamb Weston (LW) have beaten Q4 sales estimates every time, while ETSY, Fortinet (FTNT), EPAM Systems (EPAM), Meta Platforms (FB), and LW have beaten Q4 EPS estimates 100% of the time. 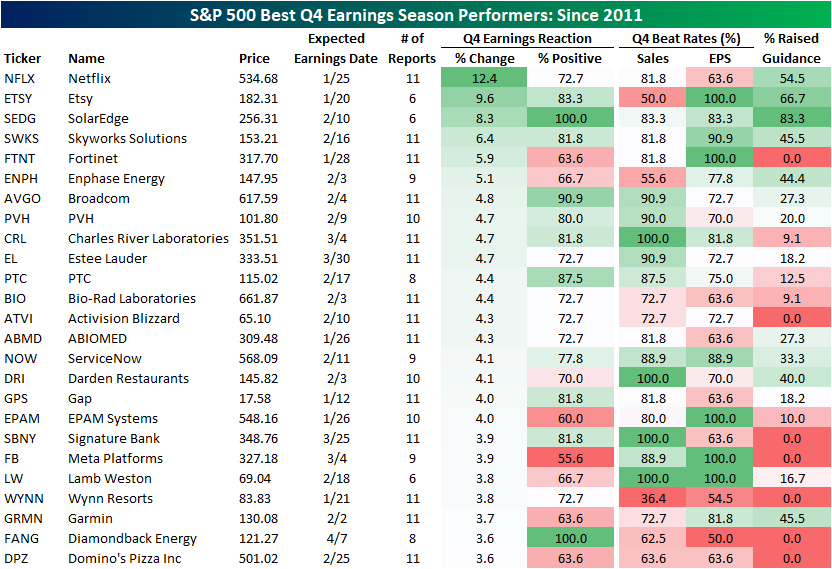 As shown, post-COVID, Netflix (NFLX) has had seven quarterly earnings releases, and the only one that the stock reacted positively to was its Q4 2020 report last January when it gained 16.85%.  The stock fell 2% or more on each of its six other earnings reaction days post-COVID. 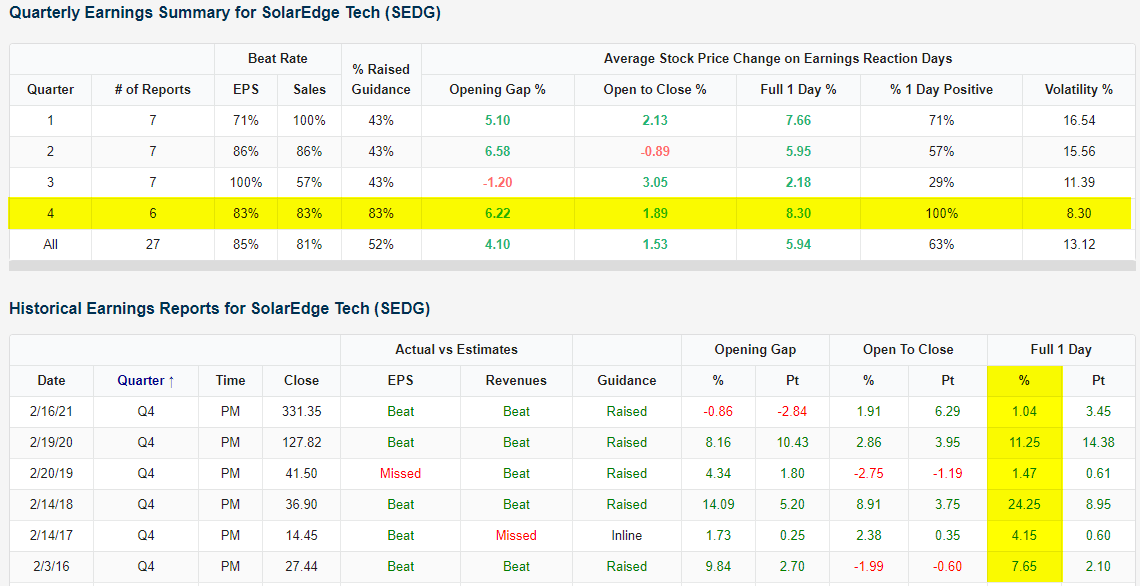 On the other side of the equation, Kraft Heinz (KHC), CH Robinson (CHRW), and Leidos Holdings (LDOS) have historically been the S&P 500’s worst performers after reporting Q4 earnings, averaging a decline of 5.5%, 5.3%, and 4.4% on earnings reaction days since 2011, respectively. None of these names have declined 100% of the time since, but Bank of New York Mellon (BK), CHRW, and ONEOK (OKE) have performed positively less than 15% of the time on Q4 earnings reaction days. Match Group (MTCH) and Under Armour (UAA) have lowered guidance at least 50% of the time on Q4 earnings, and BK, MGM (MGM), Citigroup (C), Ford (F), Under Armour (UAA), OKE, LNQ (LNQ), and Hess (HES) have missed Q4 sales estimates over half of the time. 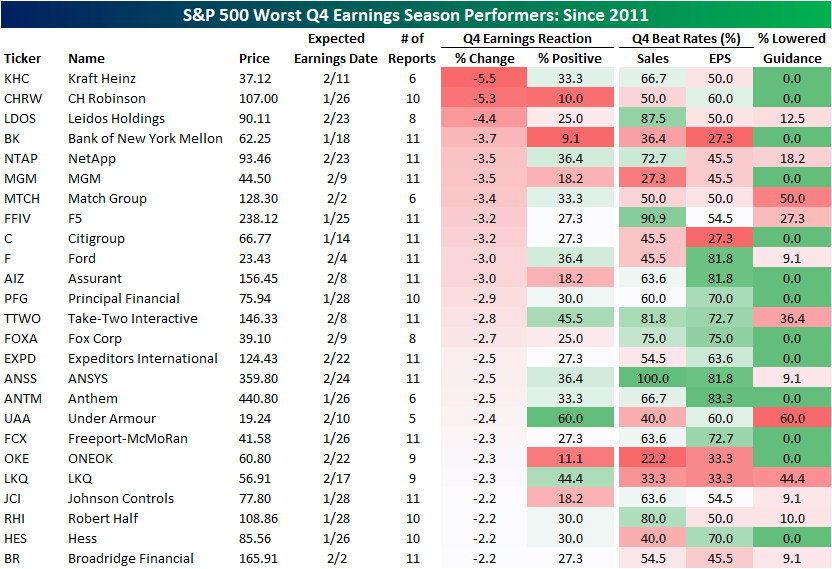 Turning back to our Earnings Explorer, since the start of the 2020, NetApp (NTAP) has traded lower following an earnings report three times, two of which occurred in Q4.  Interestingly, in the Q4 of fiscal year 2020 release, revenues and EPS beat estimates, but the equity still traded lower by nearly 14.5%. NTAP has not experienced gains on a Q4 earnings reaction day in four consecutive years.

As always, past performance is no guarantee of future results, and this is not a recommendation to buy or sell any specific securities.

If you want to stay up to date on earnings reports, we recommend that you start a 14-day trial to our Bespoke Institutional package. With this subscription, you will receive earnings coverage for the most crucial companies through our Conference Call Recaps section.