The 40 Most Volatile Stocks on Earnings

The Q4 2019 earnings reporting period starts up Tuesday with a number of key financials firms set to report, including Citigroup (C), JP Morgan (JPM), and Wells Fargo (WFC).  Below is a snapshot of the number of earnings reports expected by day over the next month from our Earnings Explorer tool that’s available to Bespoke members.  As shown, even though earnings season starts up this week, things don’t really pick up until the end of January.

As we do at the start of each quarterly earnings season, below is a list of the individual stocks that have historically been the most volatile on their earnings reaction days.  These are stocks that experience the biggest average absolute one-day percentage change on the first trading day following the release of their quarterly earnings reports.  To make the list, a stock has to have at least 10 years (40 quarters) worth of earnings reports in our Earnings Explorer database.

The most notable stocks on the list are Netflix (NFLX) and Amazon (AMZN).  Netflix (NFLX) ranks as the 4th most volatile earnings stock on the list of companies with at least 10 years of reports.  NFLX has averaged a one-day move of +/-12.63% on the 70 quarterly earnings reports it has had in its history as a public company.  While not as volatile on earnings as NFLX, Amazon (AMZN) has historically averaged an absolute change of 8.74% on its 73 earnings reaction days in our database.  That ranks AMZN as the 35th most volatile stock on earnings with at least 10 years worth of data. 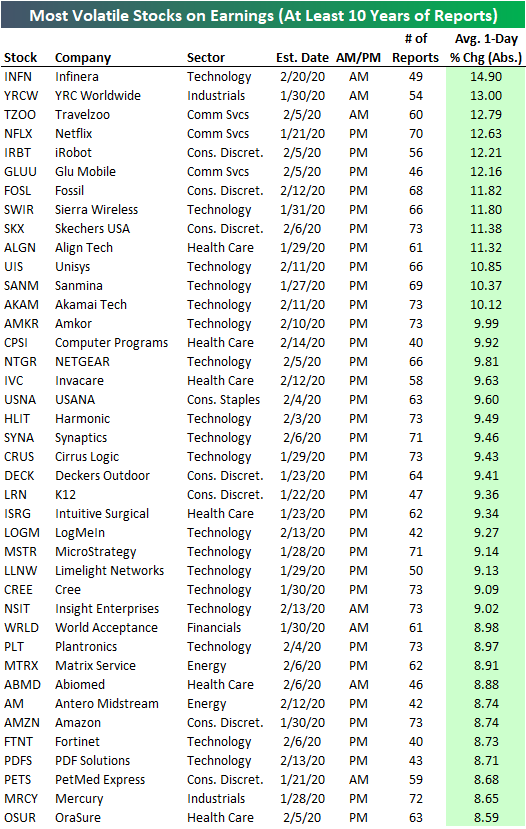 Below is a list of the most volatile stocks on earnings with less than 10 years of quarterly earnings data.  Arlo Technologies (ARLO) ranks at the top with an average one-day change of +/-18.50% on its six prior earnings reaction days.  Container Store (TCS) ranks second at +/-17.33%, followed by Snap (SNAP) at +/-17.21%.  Other notables on the list include Yelp (YELP), Canada Goose (GOOS), Groupon (GRPN), Under Armour (UAA), Twitter (TWTR), GrubHub (GRUB), Twilio (TWLO), Yeti (YETI), and TripAdvisor (TRIP).  Get access to all of Bespoke’s earnings tools with a two-week free trial to Bespoke Institutional.  You won’t be disappointed! 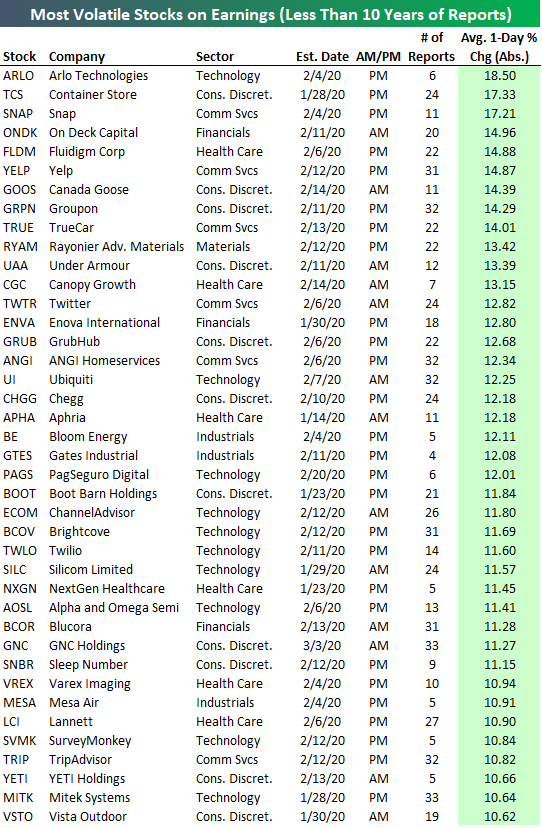