Friday is just about everyone’s favorite day of the week, but for both the entire year and since March 23rd, the best days for the S&P 500 have been Monday and Wednesday.  On a YTD basis, the S&P 500’s median gain on Mondays has been 0.70% while Wednesday’s median gain has been 0.50%.  Outside of those two days, Tuesdays and Thursdays have been modestly positive, while Friday is the only day of the week that has seen declines on a median basis.

Looking just at the period since 3/23, Mondays and Wednesdays have still been the strongest with median gains of 0.73% and 0.71%, respectively.  Behind those two weekdays, Fridays have seen improved performance with a median gain of 0.34% followed by Tuesday (0.17%) and Thursday (0.00%).  What’s notable about the nearly five months since the 3/23 low is that every day of the week has seen gains on a median basis.

In terms of consistency, Mondays have been the most positive day of the week both on a YTD basis and since the March lows.  Since the March low, Wednesday and Friday have both seen gains two-thirds of the time, and while Monday through Thursday have seen similar levels of consistency whether you look on a YTD basis or since the March lows, Friday has had a pretty wide disparity.  In the period from late January through late March, investors did little in the way of buying on ‘Corona Fridays’ ahead of the weekend, but once the initial panic of the outbreak began to subside in April, that sentiment started to fade. Click here to view Bespoke’s premium membership options for our best research available. 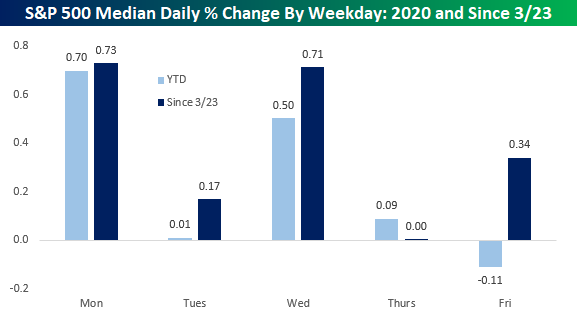 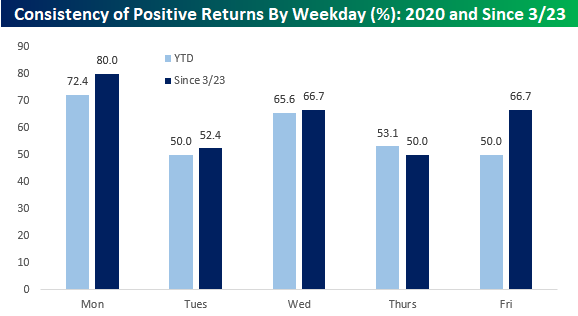