The only piece of economic data on the docket today was the Dallas Fed’s read on the region’s manufacturing sector for the month of December.  Overall activity continued to grow albeit at a decelerated pace.  The index last peaked this past April at one of the strongest levels on record.  The grind lower since then that includes a 3.7 point drop in the most recent month leaves the index at 8.1. 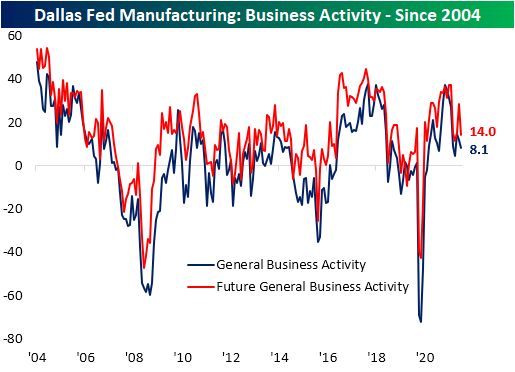 That current reading is in the middle of the historical range, but many other categories of the report remain at far healthier levels from a historical standpoint.  In spite of generally elevated readings and given the decline in the headline number, more components fell this month than moved higher. The declines in indices for expectations were both broader and more pronounced with several month over month declines ranking in the bottom decile of all monthly moves.

One general area of weakness in December was demand.  New orders decelerated modestly while there was a more substantial decline in unfilled orders.  That being said, unfilled orders remains one of the most elevated indices of the report.  Shipments were also lower, but the drop in expectations is probably more notable, setting a new post-pandemic low. 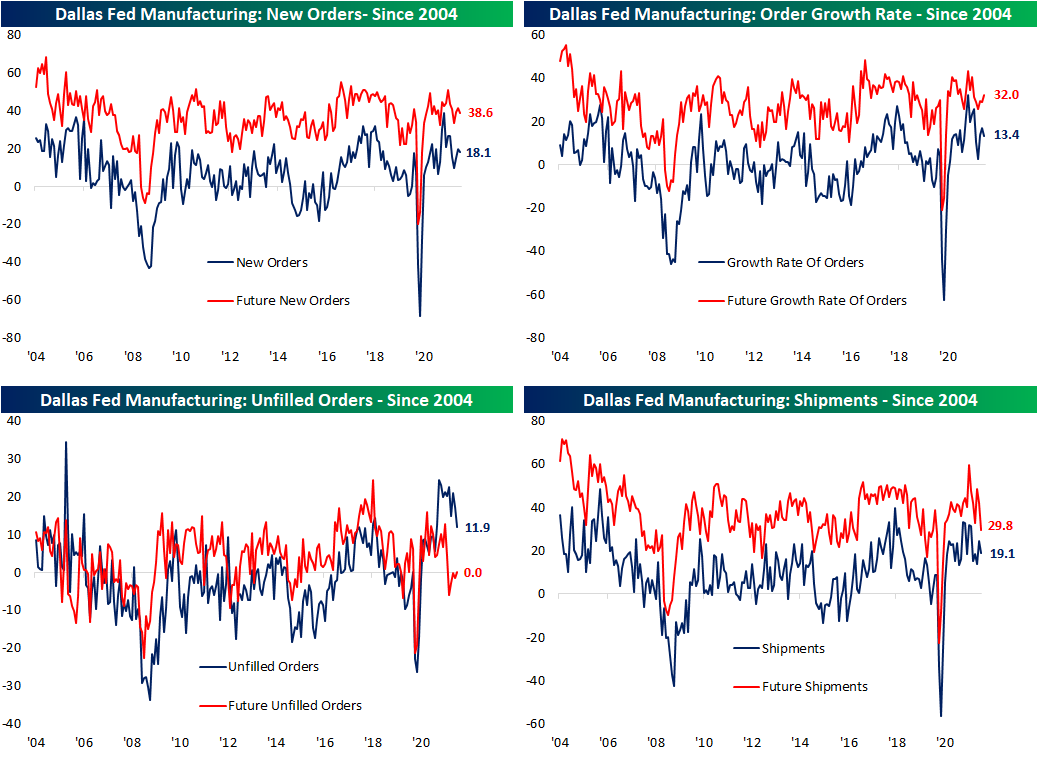 The employment situation generally improved with the index for number of employees rising to the second-highest level on record behind the April 2021 reading. Although more people were hired, wage and benefit growth slowed, even as it continues to run at unprecedentedly high levels. Hours worked were little changed. Bigger and inverse moves were seen in expectations and current conditions of Capital Expenditures.  The former saw the largest one-month drop since March 2020 while current conditions saw the largest one-month uptick since this past March. In other words, businesses continue to take on new workers, invest in capital, and pay higher prices for labor, but they do not expect this trend to be as strong in the months ahead. 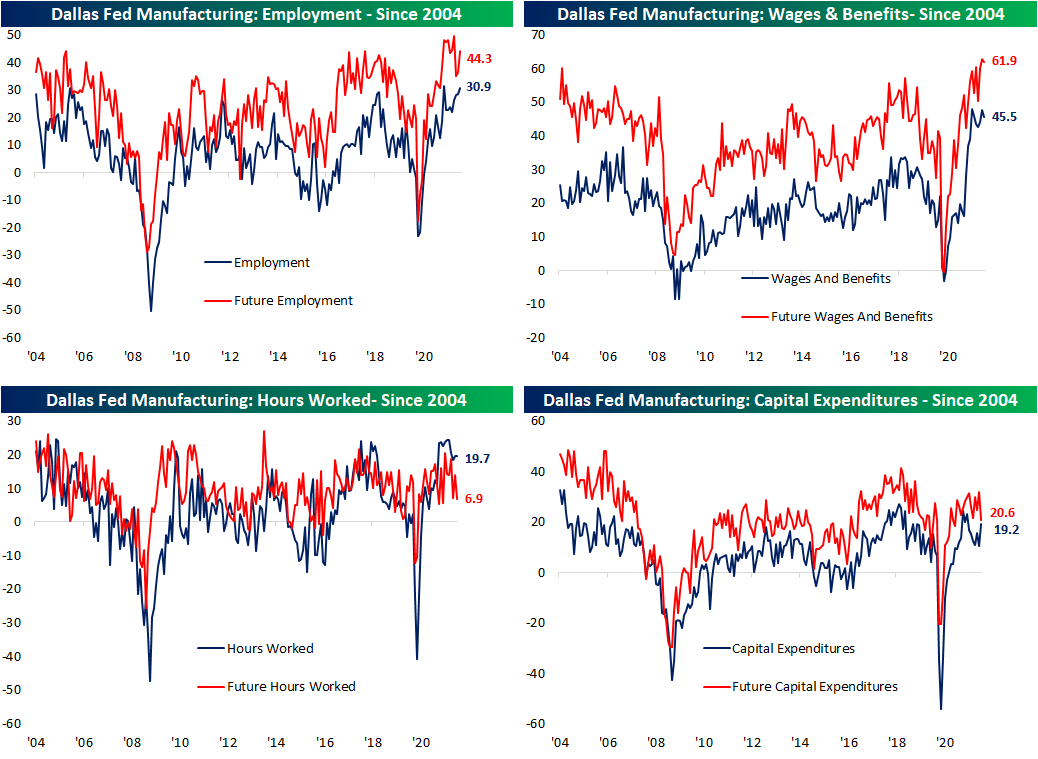 The other notable area of this month’s report concerned prices.  Prices Paid experienced the biggest single-month decline since March 2020. That decline ranks in the bottom 5% of all monthly moves and it also is off of a record high.  Prices received, meanwhile, moved slightly higher gaining 0.1 point. As for some further insights into supply chains, while firms were paying less they were waiting longer as Delivery Times continue to rebound after declines in the spring and summer. Click here to view Bespoke’s premium membership options. 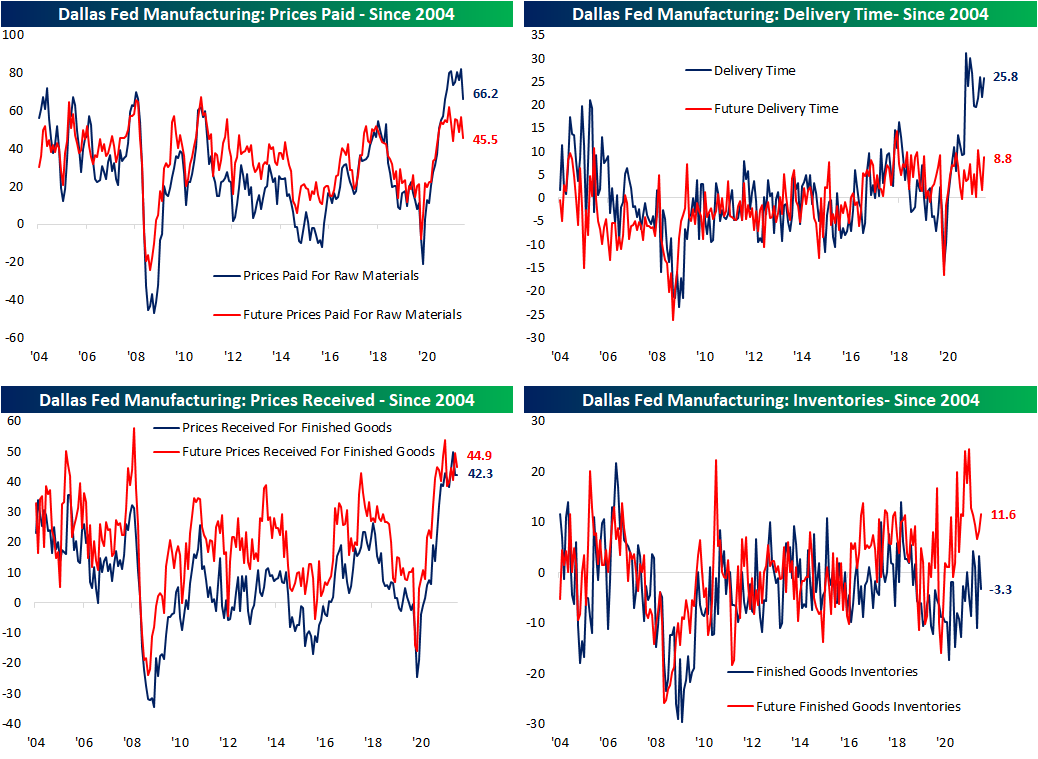