Testing of the 50-DMA

After Friday’s 3%+ sell-off, the major US indices have been bouncing around in Monday’s session as investors weigh Powell’s hawkish comments. With this sell-off comes a test of the 50-DMA, which the major indices broke above in mid-July. For those who follow technicals, this is a critical level where bulls want to see support and bears want to see price break definitively below. On the bright side, most major indices are holding up, at least for now.

Starting with the S&P 500 (SPY), the ETF is currently trading just 1.4% above the 50-DMA just two weeks after testing the 200-DMA on the upside. SPY didn’t quite touch the 50-DMA in Monday’s trading but came close enough to make the occurrence notable, and as of now is more range-bound between these moving averages than anything else.  Click here to start a two-week trial to Bespoke Premium and receive our paid content in real-time. 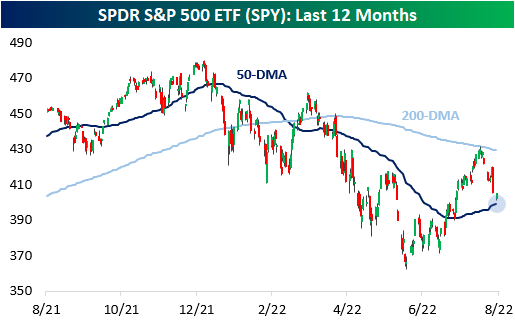 The Nasdaq 100 ETF (QQQ), on the other hand, did test the 50-DMA in Monday’s session. It found support at this level and is now trading 64 basis points above it. QQQ has a very similar technical setup to SPY, as both have been range-bound by the 200 and 50-DMAs. QQQ currently has the widest spread between the 200 and 50-DMAs of the major US index ETFs due to higher volatility. 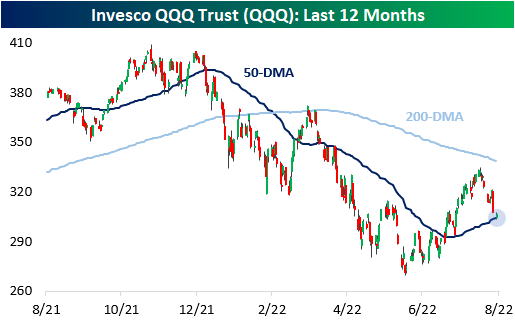 The Dow Jones Industrial Average ETF (DIA) did cross below the 50-DMA Monday, trading 35 basis points below the level at its intraday lows.  Unlike SPY and QQQ, DIA never fully tested the 50-DMA in late July and was able to break the 200-DMA in mid-August. Unfortunately for bulls, the brief stint above the 200-DMA did not last. DIA also has the narrowest spread between the 200 and 50-DMAs at 5.2% due to lesser volatility.  Click here to start a two-week trial to Bespoke Premium and receive our paid content in real-time. 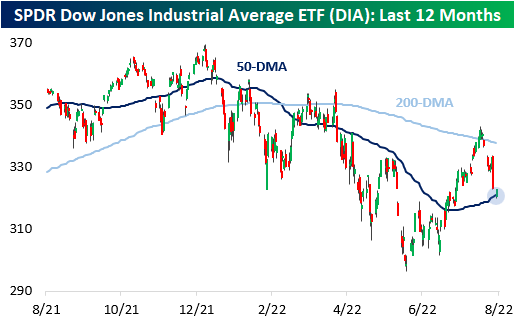 Interestingly, the small-cap Russell 2000 ETF (IWM) is relatively distanced from the 50-DMA, trading 3.1% above this level as of this writing. This is more than twice the distance than the next closest major index ETF (SPY: 1.4%). Although this may imply that IWM has further downside before finding support, the index is actually outperforming QQQ on the day. However, IWM is having a worse day than both SPY and DIA. The technical setup on IWM is quite similar to DIA. 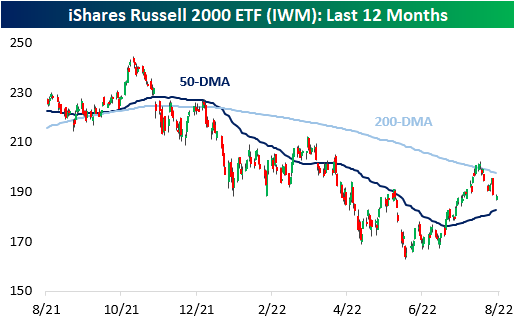 Long-story short, investors should watch how the major indices trade around their respective 50-DMAs. Further recovery tomorrow would imply support around the 50-DMA, which would be bullish in the near-term. If we see this support tomorrow, we would not be surprised to see the major indices retest the 200-DMA, but the potential results of that test is a topic for another day.  Click here to start a two-week trial to Bespoke Premium and receive our paid content in real-time.