We’ve tweeted a number of times in the last several days noting where Tesla (TSLA) would rank in terms of market capitalization if it were added to the S&P 500.  As of Monday morning with the stock up over 10%, TSLA’s $325 billion market cap would rank it as the 10th largest company in the S&P 500.  Besides market cap, though, there are also a number of other lists that TSLA would find itself near the top of.  For starters, on lists of YTD performance and P/E ratios, you would find TSLA either at or near the top of the list.  Another list TSLA would be near the top of is short interest.

The table below lists the 30 stocks in the S&P 500 with the highest levels of short interest as a percentage of float.  At TSLA’s current level, it would rank as the 31st highest short interest as a percent of float.  Looking through the list, there are a number of troubled companies or those whose businesses have been severely impacted by COVID.  For starters, there are a number of cruise lines operators, including Carnival (CCL), Norwegian (NCLH), and Royal Caribbean (RCL). Concert promoter Live Nation (LYV) has also seen its short interest levels soar since COVID with just over 10% of its float sold short.  While not quite as high as LYV, with 9.47% of its float sold short, TSLA would find itself just outside the list of S&P 500 stocks with the highest short interest as a percentage of float if it was in the index. 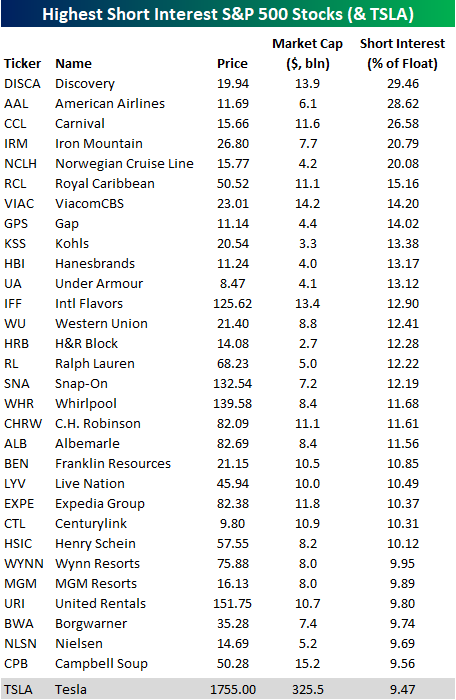 What makes TSLA’s high short interest as a percentage of float notable is that it is accompanied by such a large market cap.  Normally stocks with such large market caps don’t have high levels of short interest.  There are two reasons for this.  First, high levels of short interest are typically due to a problem with the company in question, and therefore the market wouldn’t allow a troubled company’s market cap to get so high in the first place. Second, the amount of capital dedicated to short selling is relatively small, and therefore it’s hard to build up multi-billion dollar short positions in a single stock.  Looking at the list above, though, TSLA has been a major exception as its market cap is more than 21 times the market cap of the largest stock listed above (Campbell Soup – CPB) and 38 times the average market cap of the 30 stocks listed.

Looking at this another way, the table below lists the 25 largest stocks in the S&P 500 along with where TSLA would rank if it was in the index.  Of the 25 stocks listed, the average short interest as a percentage of float is 1.02% and the highest short interest is Netflix (NFLX) at 2.55%.  TSLA’s short interest is nine times greater than the average of the largest 25 stocks and more than 3.7 times the level of Netflix!  It’s not often that you see a situation where a company reaches the point where it has one of the largest market capitalizations of any company in the world and gets there with such high levels of skepticism.  A lot of investors have made a ton of money on the back of TSLA in the last several weeks, but a lot have been taken to the cleaners too.  Like what you see? Click here to view Bespoke’s premium membership options for our best research available. 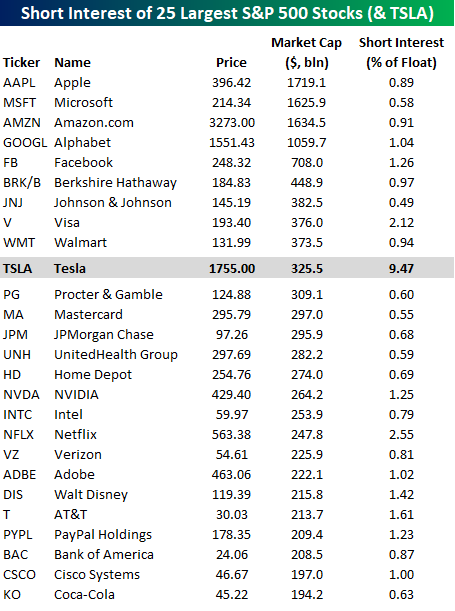