Tesla (TSLA) Once Again The Highest Valued US Auto Maker

In the past year and a half, we have periodically (see here, here, and here) kept tabs on the size of the US’s auto manufacturers: Ford (F), General Motors (GM), and Tesla (TSLA).  While on the road you are perhaps more likely to come across a car, truck, or SUV created by Ford or GM, the rookie of the industry, TSLA, actually boasts the largest market cap at the current moment with the company valued at $63.97 billion. That has not been the case all year though. The stock’s downtrend in the first half of 2019 resulted in TSLA spending a brief stint as the automaker with the smallest market cap; falling below that of Ford (F). After bottoming out in June, the stock began to grind higher, breaking out of its downtrend, and ultimately surging over 17.67% the day after earnings in October.  It was at this point that TSLA took the crown from GM which currently has a market cap of $50.38 bn. Since then even smashed windows at the Cybertruck reveal only temporarily dampened TSLA as the stock has continued to push higher in the past couple of weeks. Given that, TSLA has further distanced itself from GM and F in terms of market cap with the differences between the companies’ sizes some of the largest on record. In fact, only December of last year saw TSLA’s market cap larger than that of Ford or GM by a wider margin as shown in the second and third charts below.  Start a two-week free trial to Bespoke Institutional to access our 2020 Outlook Report, interactive tools, and much more. 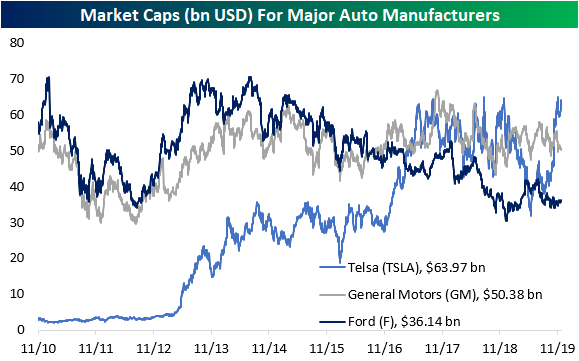