Tesla’s (TSLA) meteoric rise in recent weeks has been widely followed especially as the company’s market cap eclipsed that of all other major auto manufacturers including the previous largest company: Toyota.  While it is not a member of the S&P 500, in the table below we compare TSLA to the other 29 largest stocks (by market cap) in the index.

As we noted on Monday, TSLA has been one of the best-performing stocks year to date out of a broader range of stocks (the Russell 1000), but among the largest stocks in the S&P 500, its 226.51% YTD gain is even more impressive. That is triple the performance of the next best performer of these 30 stocks — NVIDIA (NVDA) — which has risen 73.86% in 2020.

Back at the start of the year before its 200%+ increase, TSLA was valued around $75 billion, which is around the size of the current market caps of stocks like American Express (AXP) and Altria (MO).  After its massive run higher, it would now be the 16th largest stock in the S&P 500 just behind names like Home Depot (HD) and UnitedHealth (UNH).  When it comes to the actual price of a share, TSLA would also be close to the top of the list for the S&P 500.  If it was in the S&P, Tesla would be one of six other stocks in the index with prices above $1,000 per share.  Click here to view Bespoke’s premium membership options for our best research available. 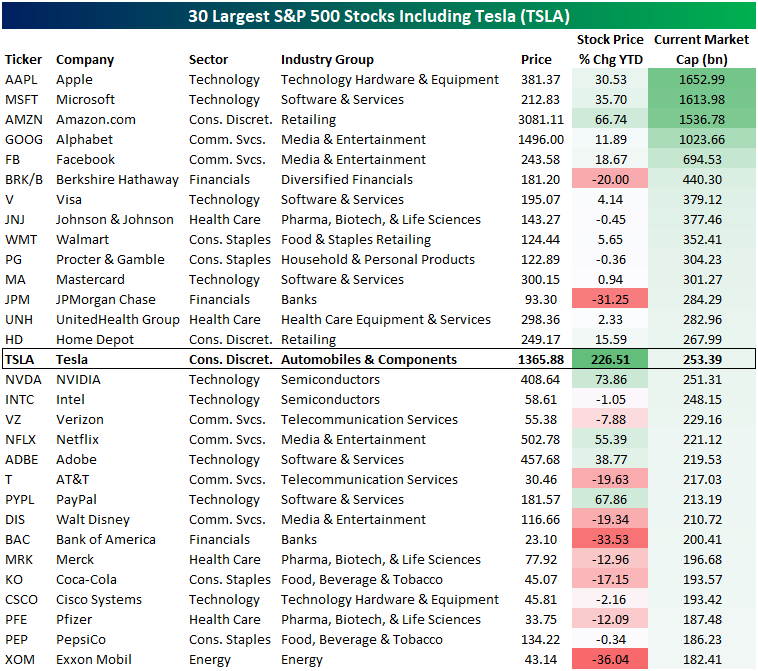