It has been awhile since we checked in on Cathie Wood’s ARK ETFs, so below is an updated look at their relative strength versus the S&P 500 SPY ETF.  After absolutely surging versus SPY in 2020 and early 2021, the ARK funds have generally been underperforming for the past six months.  That being said, they’re still well ahead of SPY since the start of 2020 given that all the relative strength lines are solidly in positive territory.  As shown, the ARK Next Generation Internet ETF (ARKW) is doing the best versus SPY over the time period shown.  Notably, the ARK Autonomous Tech (ARKQ), Genomic Revolution (ARKG), and Fintech Innovation (ARKF) ETFs have all performed roughly the same versus SPY since the start of 2020 even though they cover different industries and groups. 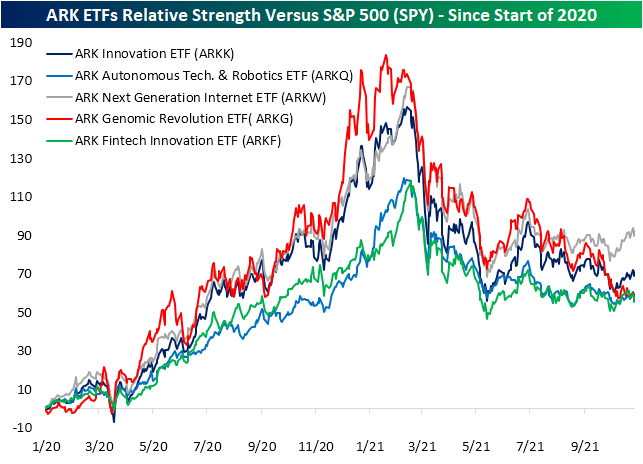 Taking a look at the largest of the ARKK funds, the ARK Innovation ETF (ARKK) has basically been range bound between $100 and $125 over the last six months.  As shown below, ARKK recently managed to re-take its 50-day moving average, but it had trouble getting above resistance at its 200-day moving average. That is even with the massive rally we’ve seen in Tesla (TSLA) lately, which is ARKK’s largest holding at 10%. 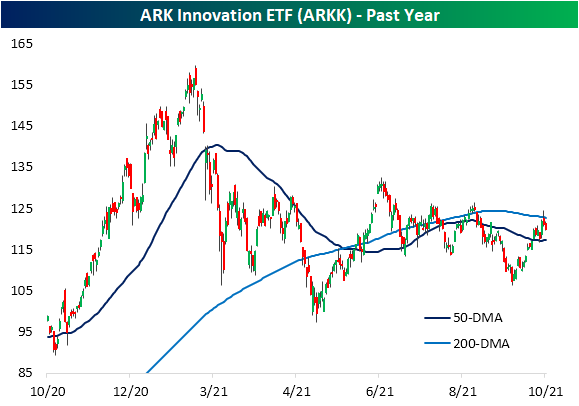 As previously mentioned, TSLA is by far the largest holding of ARKK, especially after having rallied 17.8% in the past week alone. Skillz (SKLZ) has actually posted an even larger 20.9% rally in the same span, but its weighting is far smaller at only 0.69%, meaning its gains have been much less impactful on ARKK’s performance.  As for the rest of the holdings, not even half are in the green over the past five days and only 38% are in the green year to date. Three holdings—Proto Labs (PRLB), Materialise (MTLS), and Berkeley Lights (BLI)—have seen their price more than cut in half since the start of the year. As shown in the snapshot of our Trend Analyzer below, the bulk of these stocks are also in sideways trends. 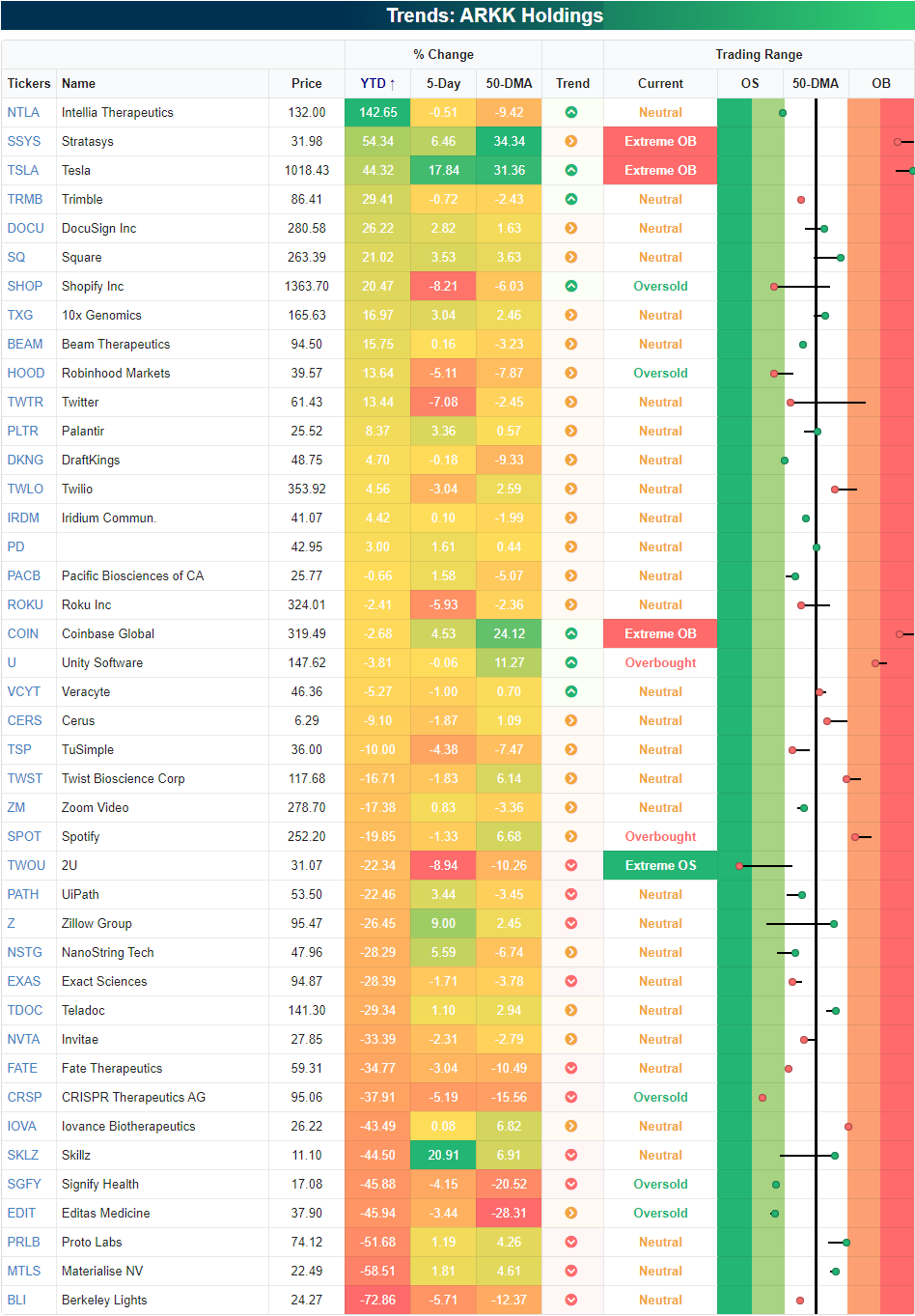 Now in the throes of earnings season, most of the ARKK holdings have yet to report results but they are scheduled to do so in the coming weeks.  Of those left to report, Roku (ROKU) has averaged the strongest one-day gain in reaction to earnings historically with strong beat rates for sales, EPS, and guidance. Speaking of beat rates, DocuSign (DOCU) is notable in having almost exclusively reported Triple Plays throughout its three-year earnings history.  Click here to view Bespoke’s premium membership options. 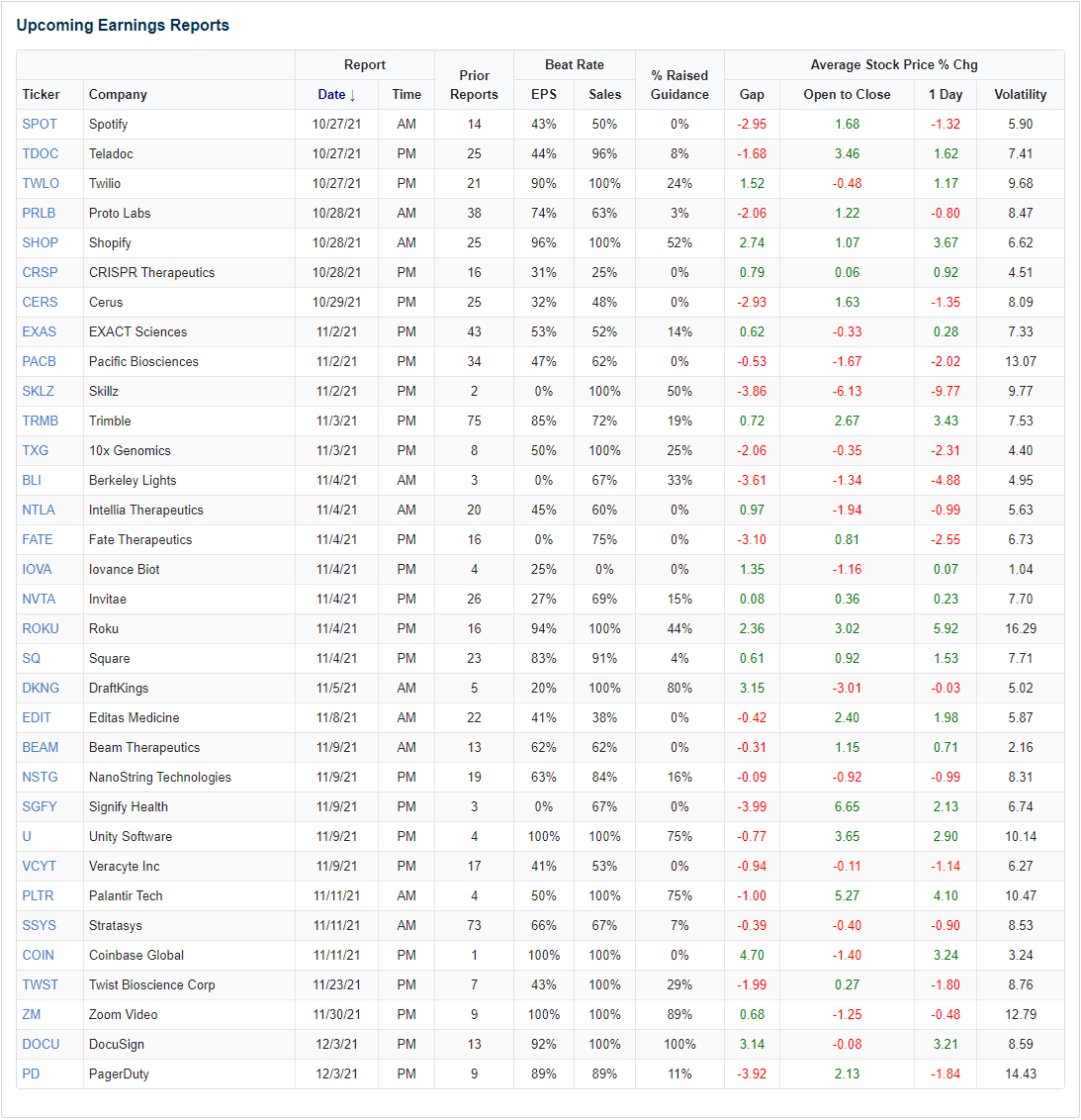