Whereas Tesla (TSLA) had been a darling of the growth trade posting gaudy returns in the first year and a half of the pandemic, since November of last year it has turned into a major pain trade. While the weakness really extends out for more than a year, only looking more recently, the stock has been in free fall and is on pace for its seventh consecutive decline in a row.  As shown below, that is tied for the longest streak of consecutive declines since the IPO in 2010.  The other streaks of a similar duration were in September 2018, December 2014, and January 2013, and none of those streaks extended to eight trading days.  Although there is precedent for TSLA trading lower as consistently as the past week and a half, the current streak leaves the others in the dust in terms of severity.  Over those past seven-day streaks, the stock never declined 14% or more, and during one of the streaks (January 2013) TSLA fell less than 7%.  The decline in the stock during the current seven-day streak has been over 25%! 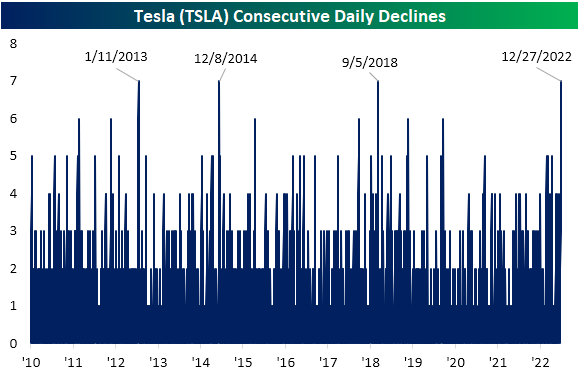 Again, that current stretch of weakness is not exactly new. Tesla has been grinding lower for over a year, and since peaking in November of last year, Tesla has seen its market cap dwindle from a high of over $1.2 trillion all the way down to only $363 billion today.  The drawdown from an all-time high in the stock’s price reached nearly 72% today and is the largest in the stock’s history, surpassing the previous record drop of 60.6% during the COVID Crash in early 2020. To get back to its prior record closing high, the stock would need to rally more than 250% from current levels. Click here to learn more about Bespoke’s premium stock market research service. 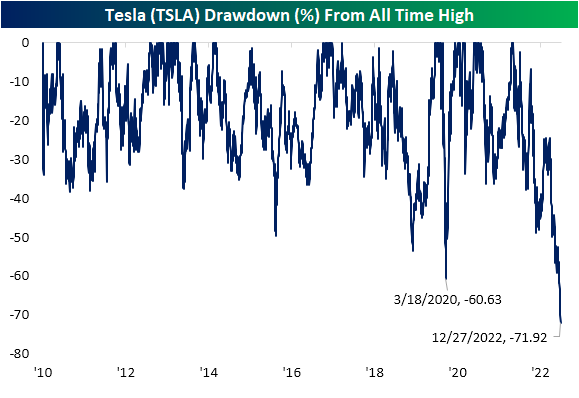