It’s been a week now since the announcement was made that Tesla (TSLA) would be added to the S&P 500.  What a week it has been!  Since the close last Monday, TSLA has seen its market cap swell by more than $100 billion from $386.8 bln up to $492.9 bln.  In a week!  When the keepers of the S&P 500 made the announcement that TSLA would be added to the S&P 500, they noted that they were giving the investment community ample advance notice and would also seek the investment community’s feedback to determine the best way to handle it “due to the large size of the addition.”  Well, it’s only been a week, but the complications of adding such a large component to the index have only gotten bigger over the last week.  $106 billion bigger to be exact! 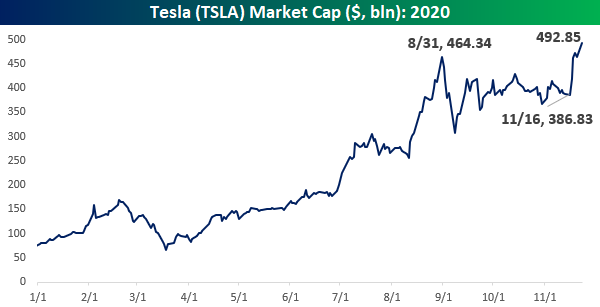 The table below lists the ten largest companies in the S&P 500 by market cap and where Tesla ranks among them. At a market cap of $492.85 billion, TSLA’s market cap ranks as the sixth-highest of any US company- over $40 billion more than Visa (V), and $40 billion below Berkshire Hathaway (BRK/B).  While TSLA has the 6th largest market cap, it wouldn’t have the sixth-highest weighting, though.  Because S&P 500 weightings are determined by the market caps of a company’s free-floating shares and not all of its shares are free-floating, TSLA’s weighting will be a few more notches down the list of the top ten companies.

Just as incredible about TSLA’s size going into the S&P 500, is the amount of market cap it has added since the announcement was made.  With an increase in market cap of just over $106 billion in the last week, TSLA’s market cap has risen by almost as much as the entire market cap of Citigroup (C) and more than other large-cap stocks like Raytheon (RTX), Wells Fargo (WFC), Morgan Stanley (MS), and IBM. Click here to view Bespoke’s premium membership options for our best research available. 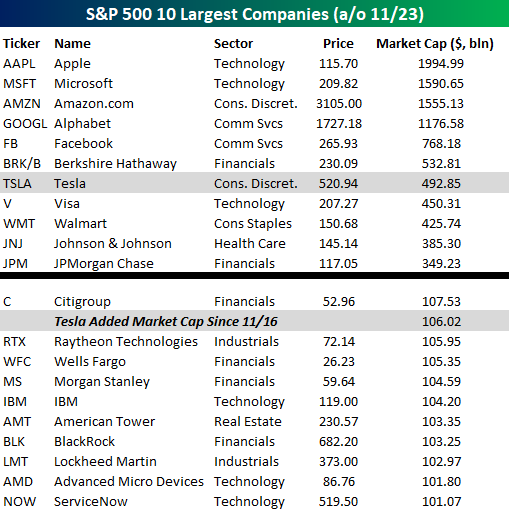